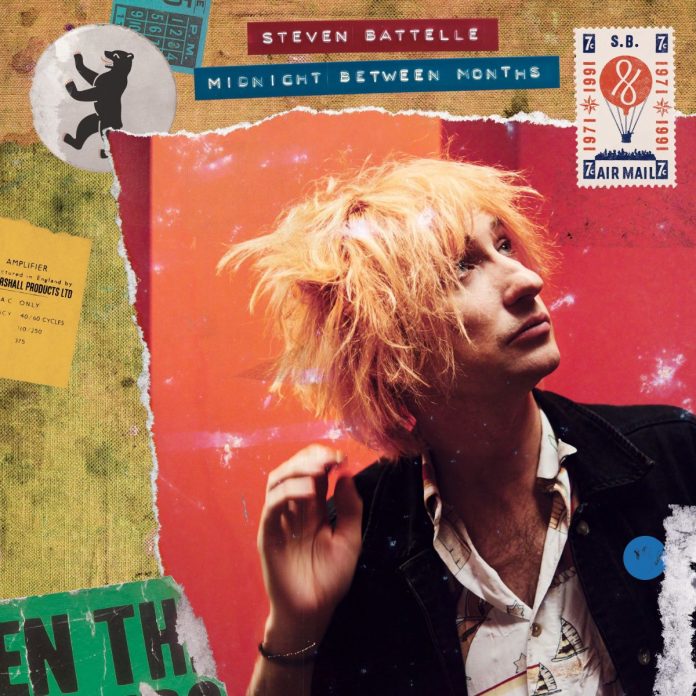 STEVEN BATTELLE can today announce his brand new solo album ‘Midnight Between Months’, which is set for release on his own Suffer For My Art label on July 19th. The record was written, performed and produced by Steven Battelle  – and co produced and Mixed with Dan Weller. Currently a much in demand song-writer for musicians across the globe, Steven will also be performing on September 12th at The Borderline at an incredibly rare live show, tickets are on sale Friday 10th May, available from – HERE
“I’m nervous and excited to be playing my first headline show in three years, all the traveling and writing I’ve been doing for these past few years is truly incredible but the bond I feel from the stage with the people who enjoy and support my music is immeasurable”

Following on from the release of his debut solo album ‘Exit Brain Left’, in 2016, this will be the
ex-LostAlone front mans 2nd solo album, and is a record that pushes his incredibly inventive and bold song writing abilities to the fore, as well as again let lose his wild lyrical inspiration.

The love, thought and pure creativity that gets poured into his work, is at times quite breathtaking. With stand out tracks like ‘Who’s Knocking At My Door?’ (“It’s a paranoid romantic horror, a nightmare love song to my medicine – music”), ‘Stick To Your Dreams Not Your Guns’ (“The song was largely inspired by visiting the Kon-Tiki museum (Oslo). I found great symmetrical parallels with my own musical life and that of Thor Heyerdahl who in1947 set sail on a raft from South America to the Polynesian islands in order to prove that people from South America could have settled in Polynesia in preColumbian times, he did this by using materials only available to those people at the time.”), ‘Magic Carpet Ride’ (“This song started life in Fornalux, Majorca after I’d taken a far too long walk up a hill/mountain with a notebook and a warm Fanta. I was dehydrated and thinking about a documentary I watched with Carrie Fisher and her mother. I really love the lyric to this song, covering Carries, Rocha De Naye and Wes Anderson characters in the verses and then a very serious self questioning chorus.”) and ‘When I Was Older’ (“It’s written from the perspective of a time in the future when all conciseness is stored in large spherical tanks and the energy created when they bounce off each other is harnessed and used as the main source of power for the planet. Everyone is given the chance to time travel back to one moment in your past physical life to advise yourself but only one moment. My future consciences travels back and chooses to advise me to enjoy every moment while its happening rather than always looking forward to the next thing.I became obsessed for a few days with trying to remember and note down all the final times I’d done things without realising it was the final time at that point.The French doctor you hear in the song is diagnosing me with a “no hope” after seeing me with a severe case of “perpetual unease.”), ‘Midnight Between Months’ is one hell of a trip.

In fact, it was during a writing session for the track ‘Who’s Knocking At My Door’ where Steven found more than he was looking for – “I wrote it (‘Who’s Knocking At My Door’) at home at midnight in the middle of a violent storm. A storm in both the literal sense and metaphorically the storm of persistent insomnia, panic induced wild outrageous dark thoughts. As seems to have become the norm for me, it was a case of getting up from an attempted sleep, walking into my studio room and documenting exactly what was happening to me. It was also this night in which the album title appeared. I realised it was midnight between two months and it felt magical, it felt like a thought I’d never considered before – the changing of months and everything felt possible, as I tend to do I became obsessed with the idea that midnight between months is a magical moment where everything ends and everything begins.”

‘Midnight Between Months’ track-listings:
1. Who’s Knocking At My Door’
2. Apple Tree
3. Stick To Your Dreams Not Your Guns
4. Running Wild In New York City
5. Shark Infested Stalker
6. Magic Carpet Ride
7. Relax!!!
8. Dancing To A Silent Beat
9. When I Was Older
10. Shipwrecked