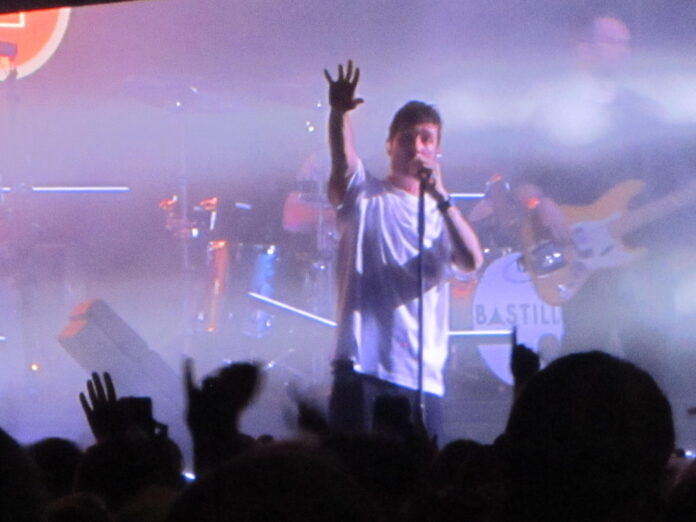 Tonight, was the first night of two sold out shows in Birmingham and the first thing that really struck me on arriving is the diverse age of the audience. This alternative / indie electropop group formed in 2010 and have recently released their fourth and latest album `Give Me the Future`.

The show opens with a couple of numbers from the latest release with `Stay Awake?` as the electronic vocal shares “Stop the world I want to get off, Lucid dreams i`ve had enough, Give me the future , give me confidence, give me cyber love” as the band join and take over this high energy dance track, we have a similar offering with `Distorted Light Beam` before the band play the anthemic earworm of

`Things We Lost In the Fire` and this packed audience really ignites. The band quickly followed this with the quite anthemic `Laura Palmer`. I thought to myself surely this high energy pace can`t be kept up as it indeed it does slow down with the ballad like `Oblivion` the dreamy `Those Nights` and `Quarter Past Midnight` a number that seems to ebb and flow as it progresses and has the faithful clapping and singing along.

The kind of soulful electropop of `Back To The Future` has everybody dancing along before the fellas share the almost rapped `Plug In…` and `WHAT YOU GONNA DO???` with it`s kind of Blur like opening, which is no surprise as Graham Coxton was on the recorded version, it`s probably the most rock out number of the night.

`survivin’` is just that a track written and released during the global pandemic.

The home stretch includes a smattering of old and new with `Give Me The Future` which blends spoken word snippets, `4AM` which is what i`d call a proper ballad, the dreamlike `No Bad Days`, the electropop `Happier`, `Of The Night` which has everybody singing along with their fists in the air and closing out with `Pompeii` which sends this crowd into meltdown as the band take their leave.

Dan, Kyle, Will and Chris soon return to share the uplifting Hope for the Future` before sending this three thousand strong audience away with `Shut Off The Lights`.

This evening was a real mix of high energy tunes along with much more reflective passages shared via a singer who gave a wonderfully energetic performance of what were at times some almost sci fi tracks with backscreens that, for those able to see them revealed some high end graphics. The enthusiasm of singer Dan Smith and his band really infected this dedicated and passionate crowd.

There are only a couple of more shows in the UK before the band head across to America but they return for festival dates at which i`m sure they’ll go down a storm.