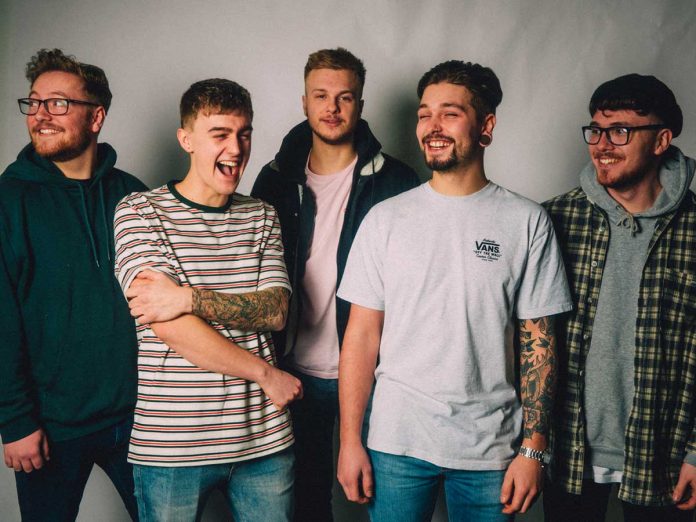 Your Life & Mine are a 5 piece Alt Rock band from Sheffield, UK. The release of their debut EP ‘Emotions Aside’ in Spring 2017 saw them sell out headline hometown shows and tour the UK and Europe with bands such as The Amity Affliction, Blessthefall and Our Last Night. 2019 is going to be a huge year for the band, Your Life & Mine aim to connect with as many people as possible.

Sheffield natives Your Life & Mine have just released a storming new track, ‘Better End The Heartbreak‘ along with a retro inspired video that compliments the track perfectly.  The new single follows a quiet 2018 for the band, where they took time off and released one single while they wrote and recorded new music. They are certainly picking up from where they left off in 2017, with the track already being snapped up by Kerrang radio where it received it’s debut. There is plenty to come from the band throughout 2019, so if you like this track (and you will), you should be excited for what comes next!

Better End The Heartbreak focuses on the topic of relationship breakdowns, Your Life & Minepackage the subject matter with soaring melodies that will stay with you long after the track has finished.

Better End The Heartbreak is available everywhere right now to purchase and stream, check it out on:
iTunes, Spotify, Amazon, Google Play & Youtube

The band explain the meaning behind the track and how they wanted the video to reflect the lyrical content:

“Better End The Heartbreak focuses on identifying when a relationship has become exhausted. The song talks about being oblivious to a relationship that is falling apart and how some of us choose to look the other way to make life easier.

The idea for the video came about when writing the lyrics. We really wanted to create a visual that went hand in hand with the song’s narrative and we wanted to push the exaggerated obliviousness as much as we could to keep it feeling fresh and tonally light. We all felt inspired by our childhood when writing the record and that’s something we wanted to reflect in all aspects of our music.

Going with the 90’s/00’s aesthetic and that VHS look felt like icing on the cake in terms of capturing our nostalgia of growing up watching our favourite bands.”

Find Your Life & Mine online: