BAND OF THE DAY: WITCHERS CREED 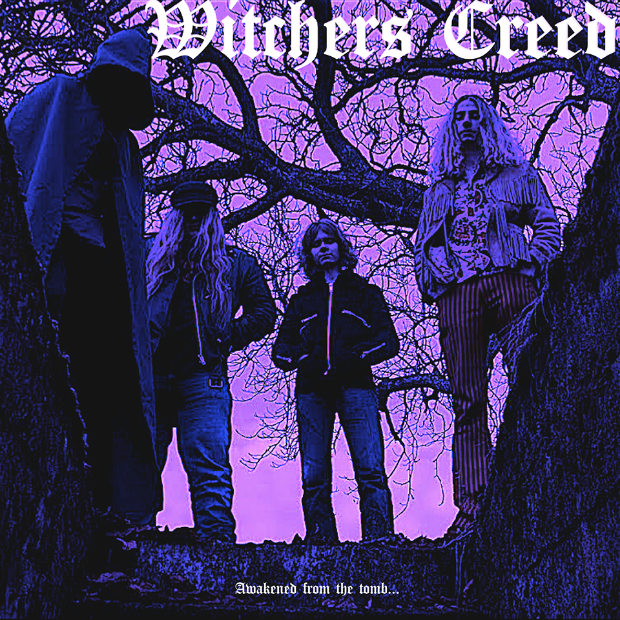 Witchers Creed traces its origin back to 2011, when Filip Andersson (guitar, vocals), Emil Bjällerhag (bass, vocals) and Charlie Rangstedt (drums) met in at school and formed a band called Illusion, inspired by Swedish ’70s trio November. But then in 2015, things went south and the band was retired. For long, they talked about forming a similar band in a heavier direction this time. They all loved Sabbath and the seventies sound, but Andersson was more of the ’80’s metal dude and Rangstedt was more of the ’60s/’70s psychedelic guy. The result, combining ’70s doom, like Sabbath, with early NWOBHM, like Judas Priest’s first albums and bands like Angel Witch and Witchfinder General from the early ’80s.

Witchers Creed continued to tinker with their sound. In December of 2017, they recruited a friend from the Illusion days, Emil Lundin from Nyköping, who had a bestial rocking voice. In the first week of the New Year, Witchers Creed entered the legendary Sunlight Studio, the cradle of the Swedish death metal sound, where great bands such as Entombed, Dismember, Hellacopters, and Amon Amarth had recorded albums. Witchers Creed recorded their first full-length album, signed to Ripple Music, and they’ve been rocking the path ever since.

“They have perfected their craft with a powerful rhythm section, notable for its thundering basslines.” wrote Paul Rote in Doomed & Stoned. “The guitar leads are no less mind-blowing – more than just short bursts, this soloing goes on and on, soaked with fuzz and venturing into Dave Chandler territory.” He concluded: “Everything you could want is right here: incredible riffs, acidic guitar leads as good as I’ve ever heard, passionate singing, even vocal harmonies.”

The new album by Witchers Creed will be Awakened From The Tomb, and fully mastered by Tony Reed of Mos Generator/Stone Axe fame at his Heavy Head Studio. It will be released on Ripple Music worldwide in all formats, including a limited multi-color version of the record on vinyl. Expect the first single to be released this October, with album to follow soon thereafter.

We’ll keep you posted on new developments as they arise. For now, dig into the band and get to know their sound!

Previous article
BEST FOOT FORWARD
Next article
THE FORMIDABLE SIDE