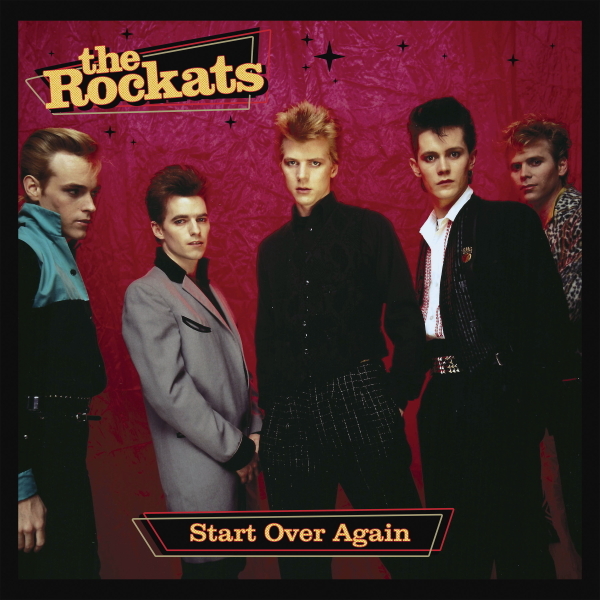 The Rockats were at the center of the rockabilly revival that took over radio airwaves in the ’80s alongside other acts such as New York’s Stray Cats, the UK’s The Polecats, teddy boy Robert Gordon, and others. Their 1984 hit “Make That Move” became a sensation on the newly christened music channel MTV and earned the band spots on tours with David Bowie, Thin Lizzy and Tina Turner to name just a few. Nearly 40 years later, the band is still going strong with vocalist Dibbs Preston, guitarists Danny B. Harvey and Barry Ryan, and bassist Smutty Smiff, and they’re still bringing their love of early rock n’ roll to the masses, having released a killer cover of Eddie Cochran’s “Nervous Breakdown” late last year in anticipation of their new album.

That album, Start Over Again, set for release on September 9, is now available for pre-order on all platforms and formats. More than 8 years in the making, the band shows off all of their musical chops, incorporating touches of punk rock and new wave to their neo-rockabilly sound. Ably assisting the band in the rhythm department is none other than Blondie drummer, and now honorary Rockat, Clem Burke. Today, the band proudly shares its second single “Lucky Old Rockabilly (Walking Down The Pike)” from the album, a song that was inspired by the original “King Of Rockabilly” Carl Perkins but could also describe The Rockats themselves.

As Preston, the song’s writer, says, “Carl was the best and original rockabilly. He was unusual for his time, a singer/guitar player who wrote his own songs including ‘Blue Suede Shoes’ for Elvis. I took the title for this song from his 1992 Guitar Player magazine interview where he said of himself ‘I guess I’m just a lucky old rockabilly walking down the pike.’ Very humble and very, very talented.”

Also be sure to catch The Rockats performing on a recent recording with two other legends from rock’s early days, star of stage and screen Ann-Margret and country pioneer Mickey Gilley, on a fun and vivacious version of “Splish Splash” that is also available as a 7″!