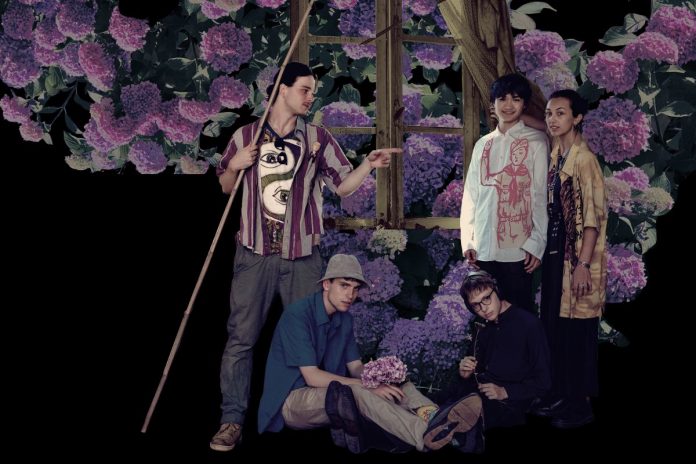 London/Leeds-based alt-rock quintet THE LONG FACES are delighted to announce that their debut EP, Documentaries, will be released on 24th July 2020. To celebrate the news, the band are streaming lead single ‘Sail Away’ in full today, out now via all good digital service providers.

Commenting on the single, the band say: “‘Sail Away’ manifested itself through a series of instrumental jams spanning several years of reinterpretation. We like to think we explored every dimension of that four-bar phrase; we’ve done speed-funk ‘Sail Away’, ‘Sail Away’ via ska punk, even (disastrously) ‘Sail Away’ in a major key. The emphasis, though, was always placed on the incessant repetition of that basic idea, with the vain hope that a song might spring from its reprisal—sort of like flogging a dead horse back to life.”

The Long Faces first developed a love of unusual rock music whilst at school in Canterbury, soaking up the city’s heritage of progressive rock, along with contemporary jazz, ’60s psychedelia and choral music.

“There’s something wistfully provincial in a lot of the Kentish music from that particular time,” explain the band. “There are some great examples of this in the early demo tapes of The Wilde Flowers, who moved on to bigger things in the shape of Soft Machine, but left behind a blueprint for melodic purity and harmonic surprise—not totally dissimilar from the way we approach our own songwriting.”

Combining agitated, emotive performance with a modern pop slant, the band have developed a style that both recalls its influences and pursues a highly unique path of its own. It’s this blend of old and new which explains the dreamlike sensation at the heart of their sound—surprising but familiar; abstract yet relatable. Further bolstering their musical prowess, front man Tom Lane’s highly distinctive vocals possess a romantic, whimsical quality that transport the listener to a simpler time and place, where all that matters is love and escape.

With three standalone singles released to date, ‘Cadence’ (2017), ‘Sum of My Cares’ (2018) and ‘Jane!’ (2018) have so far racked up a mind-boggling 2.5 million organic streams on Spotify. “It’s been a bit surreal,” they say, “considering we put those songs out with minimum expectation – we did it mainly for the satisfaction of having music published under our name. It’s a strange but inspiring feeling to know that someone is always listening.”

The band have acquired a remarkably fervent international fan base with little to no editorial coverage at streaming platforms, scarce live performances, and a sum total of zero media support to date. In 2018 they managed to elbow their way onto a list of the top 100 tracks of the year at El Salvador’s biggest national youth radio station Femenina 102.5, landing themselves a top 20 spot.

“It’s kind of funny how far-removed this radio station is,” they muse, “and to think that for some reason ‘Jane!’ seems to have resonated particularly with Spanish speakers. We actually expected this track to be our most popular at first, and though it hasn’t turned out that way, it’s great to see it find a home in this small corner of America.”

The Long Faces are: