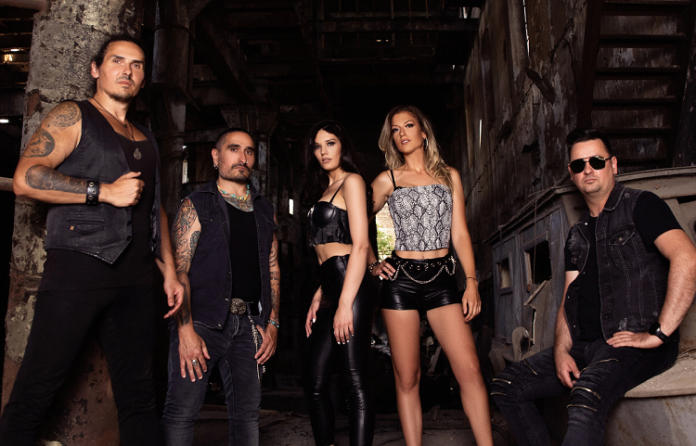 Frontiers Music Srl is thrilled to present ‘Never Say Never’, the debut single by Serbian hard rockers The Big Deal, which is available now on all digital music platforms and as a promo video.

The Big Deal feature two outstanding vocalists in Ana Nikolic and Nevena Brankovic (who is also a highly skilled keyboard/piano player) and offer a catchy, driving sound that will appeal to both hard rock and melodic rock fans. ‘Never Say Never’ serves as an appetiser for their forthcoming debut album, which has been written by the team of guitarist Nevena and Srdjan Brankovic and will be released in spring 2022.

The Big Deal came together when Nevena and Srdjan began working with Ana, who had previously fronted local bands. Pairing the two girls on vocals for some studio recordings produced outstanding results and morphed into further music that was presented to Frontiers and ultimately got them signed. Completing the line-up is drummer Marko Milojevic, with Alessandro Del Vecchio later added on bass.

Srdjan and Marko are members of the successful Serbian prog metal band Alogia, while the former has toured, recorded and collaborated on countless studio and live albums. He has opened for bands such as Whitesnake, Ian Paice, Apocalyptica and Savatage, and was also a member of Michael Matijevic’s live band in Bulgaria. On his ‘Expedition Delta’ and ‘Alogia’ albums, he worked with the likes of Tim ‘Ripper’ Owens, Mark Boals, Erik Norlander, Gary Wehrkamp, Fabio Lione and Hansi Kursch.

To introduce themselves, The Big Deal released covers of songs by Europe, Nightwish and ABBA in 2021 as a precursor to debuting their own music. Videos for those songs can be seen here:
Rock The Night (Europe) youtu.be/Z-7MUGZdr3w
Amaranth (Nightwish) youtu.be/awHXfrrQiHE
Gimme! Gimme! Gimme! (A Man After Midnight) (ABBA) youtu.be/4m2fKZyR2-8