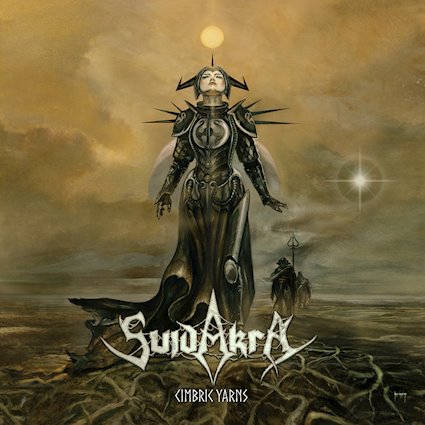 SUIDAKRA release their new album ‘Cimbric Yarns’ on November 16 on AFM Records, and is the thirteenth studio after 24 years of band history.

The official video for ‘Ode To Arma‘ has just been released and you can check it out here:

Instead of their characteristic bombastic melodic death metal, the musicians impress with an acoustic, ambient masterpiece that takes the audience into a mystical land far before time.
Based on a fantasy world which was created during the artwork/soundtrack collaboration between the painter Kris Verwimp and Antonik on “Realms Of Odoric”, the Belgian artist explains:

“Continuing the ‘Realms of Odoric’ saga, ‘Cimbric Yarns’ harks back to where it all began. Thousands of years before Odoric’s time, there existed an advanced civilisation that perished in a great cosmic cataclysm. ‘Cimbric Yarns’ is an attempt at recreating its mythology, inspired by ancient Celtic texts and megalithic sites from all over the world. It weaves a fine thread between history and fantasy, chronicling the fate of its main characters Cruàc, Arma and Aenea in 10 compelling acoustic songs.”

The album will be available as Digipak and clear orange, gatefold Vinyl (ltd. to 300 units)