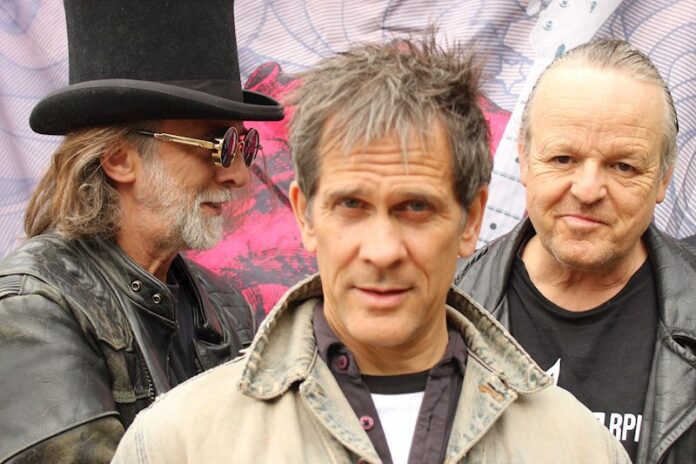 Alternative power rock trio, MRS BECKETT, announce plans to release their debut album, Unattractively Needy, which is out on Friday 23rd September. The record is preceded by a brand new single and video, Lucky Day, out now – https://youtu.be/Aodb0m6oFao .

Harnessing influences spanning from an array of sources, from the grit and guile of Motorhead and Tom Waits, to the groove and shake of Little Richard and James Brown, MRS BECKETT fuse the strident passion of authentic alt-rock pinned against a modern-day urban backdrop. The band’s sound is unique and compelling, and springs right up, deserving attention.

From the North East of England, MRS BECKETT was formed in 2019 by lead singer and guitarist, Jim Kitson, who made an abortive attempt to write a musical of the same name about a band reforming after one of its members had transitioned. Kitson comments: “Writing the first songs by plugging my Telecaster into my Marshall valve amp and letting rip, I had an epiphany:  I hated Musical Theatre and only Rock ‘n’ Roll meant anything to me”. He took the songs to long-time musical companion, Pete Peverley, who agreed to play bass. The duo then approached North East music scene stalwart, Dave Pipkin, to be the band’s drummer. “I’m not playing any f*cking covers” said the cranky brummie.  And there MRS BECKETT was born.

MRS BECKETT are now loaded with a spanking debut album entitled, Unattractively Needy, which carries a hefty collection of alt rock cuts that twist and contort around your eardrums. There’s a real authentic vibe to the album too. Jim goes on to remark: “We recorded in The Shed at my house in County Durham, all playing live together in the room, no click tracks, the guitar and bass sounds are what came out of the amps and there’s not much on the drums except Dave’s sunny smile!”  The rising northerners are now poised to cement their name in the UK fraternity for many years to come.