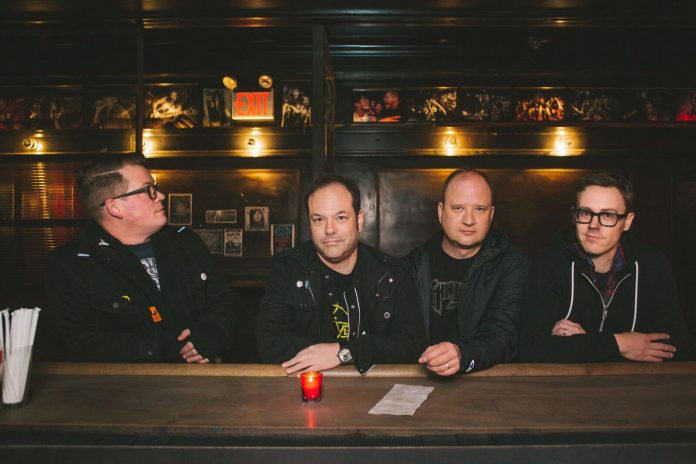 The Mr. T Experience’s history spans over 30 years and eleven studio albums, not to mention countless singles and EPs. Through the decades of gradually evolving line-ups and their contributions, the one consistent element of the band has been Dr. Frank: guitarist, wordsmith, and melody maker.
As Alex Scordelis of Noisey/Vice wrote:
“[Dr. Frank] earned a reputation as a songwriter with a flair for tightly constructed songs with witty wordplay. Lyrics like “My happiness is infinite/when my life has this nymph in it,” and his ballad “Even Hitler Had a Girlfriend” established him as a wordsmith in the vein of Cole Porter and Noël Coward, rather than Ian MacKaye or Jello Biafra.”
Dr. Frank as “the Cole Porter of punk” stuck — and along with the varied cast of characters performing from album to album has made the band unique and influential within circles of aspiring bands across the numerous genres of rock music.
The Mr. T Experience formed in 1985 in the way all good bands do, from a group of friends looking for something to do in the name of rock and roll — some would say to make good music, others to have a good time, but in hindsight, it was probably mainly to meet girls.
Soon after the self-release of their first album “Everyone’s Entitled to Their Own Opinion” (1986). the band began gaining attention from local college radio and a following of fans as a regular house band at 924 Gilman — an incubator of sorts for Bay Area bands including Green Day, Operation Ivy, Sweet Baby, Samiam, and many more.
The band built enough of a following to release a full-length record, “Night Shift at the Thrill Factory,” and an EP “Big Black Bugs Bleed Blue” on Rough Trade in 1987 and 1989 respectively. It was during this time that Dr. Frank started opening songs with “This is a song about a girl,” and people started to take notice of the Mr. T Experience’s catchy, fun, and self-deprecating songs. The band started to get a following — but all the self-deprecation in the world couldn’t prevent Rough Trade’s US division from going under. And after a line-up change, they signed to then upstart label, Lookout Records in 1990 — a relationship that they maintained for over 20 years.
Shortly after signing to Lookout, the band released, “Making Things With Light” and later “Milk Milk Lemonade” in 1992. It was during this time that they began touring extensively. In 1993 the band released “Our Bodies, Ourselves, “which was a turning point for the band — frequent line-up changes forced Dr. Frank took more control over its direction in terms of creative output. This period of supervision, led to some of it most productive activity in the middle to late part of the decade, releasing a string of fan favorites: Love is Dead (1995), Revenge is Sweet, and So are You (1997), and Alcatraz (1999). The albums within this period have collectively called “classics” by fans — garnering the most recognition to date.
In the early 2000s, the band continued with The Miracle of Shame (2000) and, with yet another new line-up, Yesterday Rules (2004). Shortly after, the band went on hiatus as Dr. Frank focused on his writing career, releasing the young adult novels, “King Dork” (2006) and “Andromeda Klein” (2009). It was also during this period that their longtime label, Lookout Records, folded as the result of the changing music landscape.
A few years later, Dr. Frank released his follow up to “King Dork” entitled, “King Dork Approximately.” It was during this time that Dr. Frank was approached by Sounds Rad to help promote his concept record for “King Dork Approximately” recorded by the latest iteration of the Mr. T Experience. Initially released asa download-only“Balbum” or book/album, Sounds Rad encouraged Dr. Frank to release a full-fledged record on both vinyl and CD. Inspired bythe results of the release, Dr. Frank decided to work with Sounds Rad to restore the now out-of-print original Mr. T Experience discography.After two years of searching, annotating, logging, and transcription, the band, has recovered most of their material in the highest possible fidelity for future reissues on Sounds Rad.
The process of recovering the master recordings was painstaking. Dr. Frank sourced the original tapes from every conceivable location—from the remaining Lookout archives, to several garages,to under the couch of studio from a long-forgotten mastering session, andto even a boot found in the back of a closet. As crazy as itsounds, Dr. Frank searched high and low because there was a very real sense that this project was about preserving the legacy of the band. Hundreds of hours were spent searching for and cataloging the discography before digitally transcribing the masters to a more durable format.
Valentine Preorder