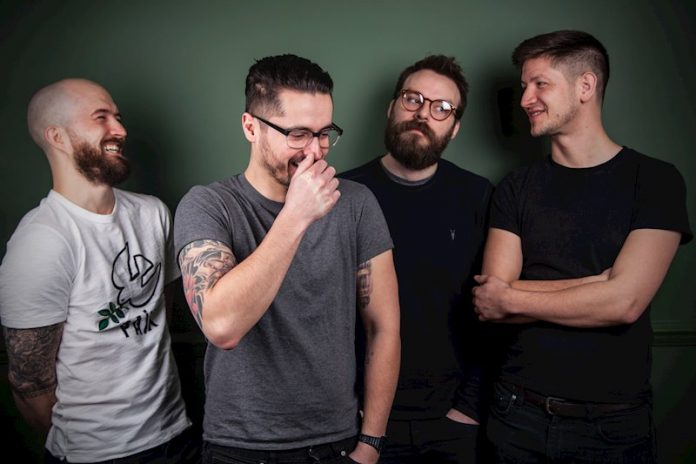 Highly-rated post-hardcore quartet, MERRICK’S TUSK, draw from an impressive encyclopaedic knowledge of the back catalogues of Rival Schools, Thursday, and At The Drive In, as well as the modern guile of Coheed And Cambria and the Deftones. The emerging Nottingham crew will release their eagerly awaited debut album, Between The Earth And The Trees, on Friday 3rd May via Undead Collective Records. Prior to this, the band have just revealed a live video for the track, Hold The Waves –

MERRICK’S TUSK have been ever-present on the UK scene in one way or another for the past ten years. John (guitar, vocals) and Adam (bass, vocals) toured in several bands before enlisting Tim on drums and laying down their debut EP, Sonder, in June 2014. That trio remained constant until the arrival of Sam (guitar), who entered the fray after the release of their sophomore EP, Regroup & Reform, in 2016.

Confident with the new line-up, the invigorated four-piece headed out to tour Europe, pushing their old Royal Mail van to the limit with a route across Germany, Poland, Czech Republic, Luxembourg and The Netherlands. As well as captivating crowds in the mainland, the band have wooed audiences on their home turf, sharing stages with everyone from Fangclub, Vasudeva, Tellison and Beach Slang, as well as playing alongside Jonah Matranga at the end of 2018 to tour the 20 year anniversary of Far’s seminal album, Water & Solutions.

Last year, MERRICK’S TUSK commenced work on their new record with visionary producer Jason Wilson (Dinosaur Pile Up, Reuben, Fightstar) at Stakeout Studios, London. After a series of intense sessions, the band came away with their full-length debut album, Between The Earth And The Trees. From back to front, the release shines with acute oft-kilter phrasing, engrossing guitar parts and hammering rhythm work, all cleverly woven together with killer hooks. The post-hardcore outfit will tour and push the release throughout the UK and beyond.

And yes, they are named after the Elephant Man.