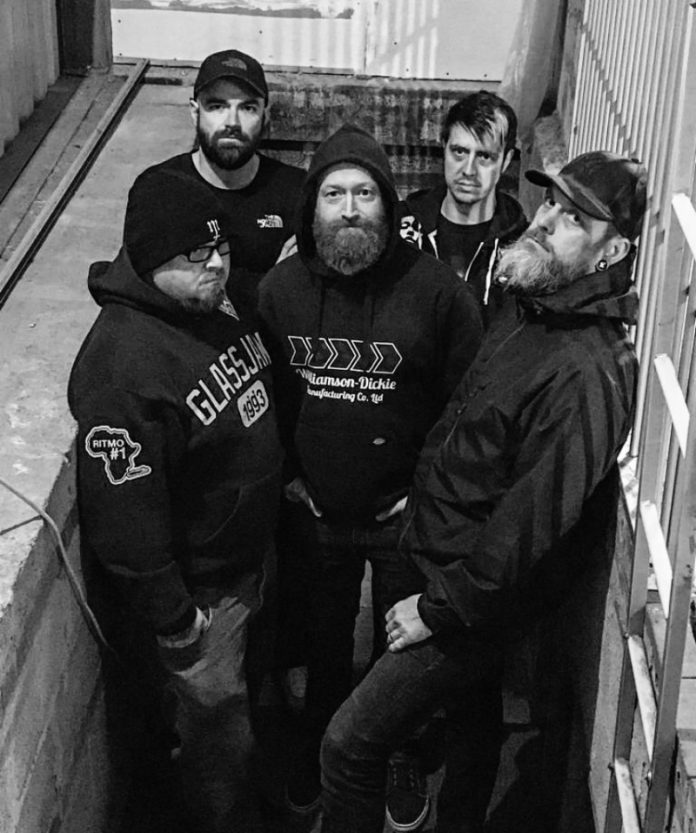 Like a black mould that just won’t clean away, Kingston Upon Hull’s premier misery spreaders MASTIFF have returned from their darkened sewer, bringing with them a viral monstrosity that threatens to infect and destroy music as we know it.

Releasing 1st February 2019, Plague is the band’s first full-length album on APF Records, and represents the misanthropic quintet at their most aggressive and unrelenting. Born of their disgust at humanity’s false nature, and the way in which our deceit and lies spread through social media,Plague is the culmination of a lifetime of frustration, hatred and sorrow, filtered through the most brutal and pummelling material MASTIFF have ever concocted.

Plague was wrought from misery itself in the blistering summer of 2018 at Studio 94 in Hull and recorded entirely live in one room with no tracking involved, with track ‘Black Death’ done entirely in one take. It was recorded, mixed and mastered by Mikey Scott.

The self-styled “miserable band from a miserable town” play a combination of sludge, grindcore and aggressive hardcore and have forged their reputation in a live setting, playing every dive and sh*thole in the country. New album Plague is their most formidable to date, spewing out berserk levels of unadorned aggression and intensity.  Across eight tracks of mutable anger, raw power and bitter resignation, MASTIFF manage to capture the sound of a country in its death throes with lyrical content dealing with everything from sorrow and pain to human failure and frustration. From the opening blast of ‘Hellcircle’ to the apocalyptic finality of ‘Black Death’, the album is a work of nail-biting extremity, and finds the band veering wildly from Nails-esque grind into the depths of harrowing doom. The end result, a band that sounds like it’s trying to rip itself apart through music.

Plague follows on from the band’s 2016 debut release Wrank and 2017’s EP Bork. In addition to their critically acclaimed releases, MASTIFF have become revered for their rabidly heavy live shows, gigging extensively with an array of artists such as Agnostic Front, Crowbar, Iron Monkey, Conan and Biohazard plus appearing at renowned festivals such as Bloodstock, Deserfest London, Riff-Fest, Techfest and Dreadfest.