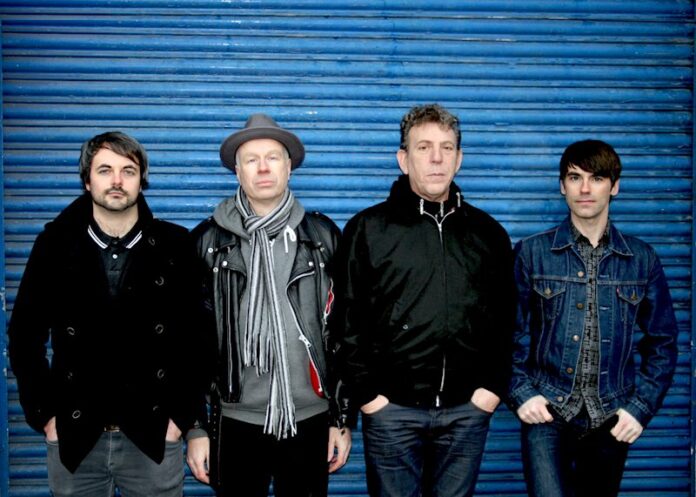 Much revered UK Post-punk foursome KLAMMER mark their return with the release of their blistering new single and video, Progress (or the lack of), which arrives on Friday 18th February. The band’s brand new album, The Day Before Yesterday, is out via Heavy Metal Records, on Friday 25th February.

Taking influence from an assortment of arenas panning from post-punk, darkwave, goth rock and punk rock, Leeds-based KLAMMER embrace all things dark, loud, angular and melodic. The popular quartet have meticulously crafted a hugely distinctive sound that is crammed with integrity, loaded with dark pop sensibilities, and rife with layered edges that are hypnotic and deeply compelling. Formed by UK producer Steve Whitfield (The Cure/The Mission/Jane Weaver) in 2014, KLAMMER have cultivated an impressive and loyal fanbase following the release of three albums to widespread acclaim, with the band’s previous singles, Modern God and Spiral Girl, both racking up airplay on BBC 6 Music. Aided by a stellar live reputation that has seen the post-punk crew consistently play throughout the UK with everyone from The Skids, The Undertones, Richie Ramone, Chameleons Vox, Penetration, and The Membranes to Ruts DC, KLAMMER have also wooed crowds at the Rebellion Festival on multiple occasions, as well as successfully appearing at The Great British Alternative Festival and Whitby Goth Weekend.

At the end of 2021, KLAMMER inked a deal with Revolver Records and their imprint, Heavy Metal Records, and released a new single and video for the track, Broken Dreams In A Crashing Car . The darkly rockers now unleash their much-anticipated new album, The Day Before Yesterday, this February. Guitarist, keyboardist and producer, Steve Whitfield comments: “There’s much more space in most of these songs than the previous album—we purposely tried to leave more emptiness in them. The drums were recorded in 3 days at Loom Studio’s in Leeds and then everything else was recorded at Mead Studio. I definitely think the pandemic has influenced it, and given it an even darker feel.” Right from the off, the album is a pungent fusion of post-punk, dark rock that takes the listener on a potent aural adventure.