BAND OF THE DAY: DIAMOND BLACK 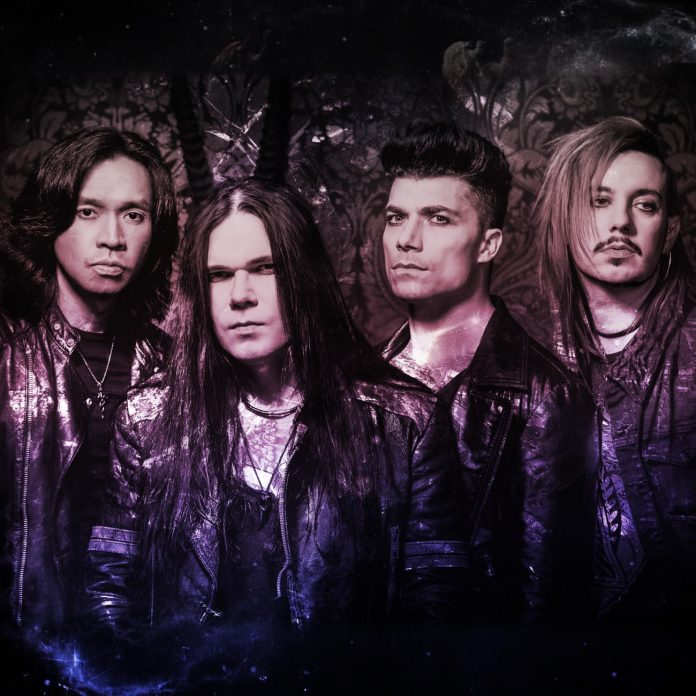 Intense, sensual and arcane, Diamond Black are a dark-rock quartet based in London. Founded by Ben Christo (guitarist in The Sisters of Mercy), the band deliver crushing riffs, mesmerising electronica and cinematic choruses: a dark fusion of irreverence, intrigue and isolation. Hard rock with melody, meaning and mystique, their music is powerful and muscular but can also be fragile and haunting, with lyrics and themes that are often nuanced and introspective and an emotive vocal that ranges from a brooding whisper to a venomous scream.

There are 80’s rock and electro vibes and 90’s industrial and metal flavours, but there is a contemporary darkness too – all tied together with a cohesive melancholy.

Inspired by the heaviness of Katatonia, the passion of Depeche Mode, the haunting soundscapes of Type O Negative and the anthemic melody of The Cult, Diamond Black weave tangled tales of desire, decadence and devotion.

The band’s debut single, ‘Sorrow’, was released in October 2017 to much acclaim. Premiered via Metal Talk, its distinctive promo video received rotation on Scuzz TV, while the song was hailed and shared by peers such as Rob Zombie’s band, Therapy? and The Mission.

Arriving hot on the heels of a well received run of UK dates (their first ever live shows) with Swissalt/goth/folk/prog pioneers Cellar Darling, ‘Ghost In The Glass’ is the pounding, soaring follow-up to ‘Sorrow’, maintaining the haunting heaviness of its predecessor while showcasing another shade of Diamond Black. In the band’s words, the song is “equal parts ferocity and fragility, a tale of sin and solitude, crafted to lure you into the depths of the diamond black…”

Finnish singer J.I. Turunen’s powerful vocals are delivered with a distinctly Scandinavian melancholy, while Christo’s unforgiving riffs and emotive lead-lines provide a dramatic backdrop. Add a thunderous, dynamic rhythm section, courtesy of drummer Jan-Vincent Velazco and bassist Adam Lightspeed and encase it all in the cutting-edge darkwave/electro-rock production of Finnish visionary Jaani Peuhu and the result is the explosive and evocative sound of Diamond Black.

When asked about their name, the band claim that “it simply appeared from the ether – and it works. ‘Diamond Black’ means dark rock with sparkling melody, heartbreak tinged with hope, isolation imbued with inspiration, lust laced with loneliness.” As such, meaningful lyrics are central to their vision. Sick of the throwaway, tacked-on, clichéd words of much of today’s music, they explain that “we only write what we feel, so the lyrics are intensely personal, fiercely honest and cathartic and are born from regret, crushing anxiety, emotional fragility, fear, desire, insecurity, addiction and hedonism.

Testament to the genuine, often very personal and specific nature of their songs, they add that “even though we have only released one song until now, we have already received numerous mails from fans about how much the words and music have moved them, inspired them and even helped them through some hard times. That’s amazing. That’s one of the main reasons we do this. Because that’s what the music of other band’s has done for us. In short, we are writing this music for all the other black diamonds out there… those who are still shining in the darkness.”