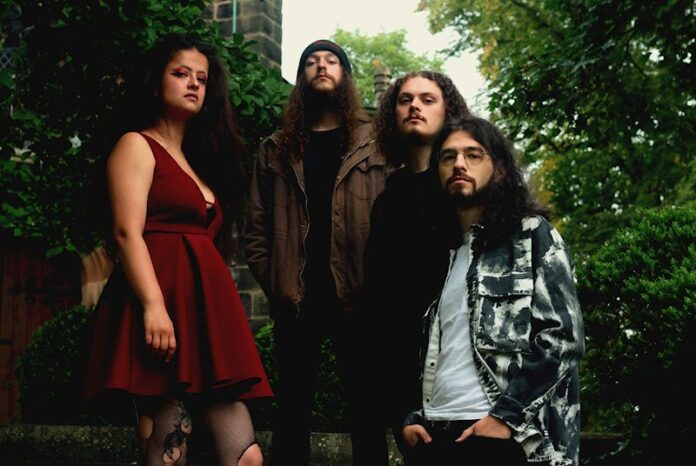 UK alternative four-piece DEADWING have announced their arrival with their brand new single, The Faceless, out now. Watch the video, here – https://youtu.be/5B_63yAwWio

Comprised of members originating from Scotland, Wales, England, and Romania, DEADWING planted roots in Manchester in 2019, and ever since, the Brit progressive rock crew have built a strong foundation and captured keen interest by unleashing a handful of engrossing slabs of twisted alt-rock wonderment. With an expansive catalogue of influences panning from Tool, Black Sabbath and Alice In Chains through to Dream Theater, Radiohead, and Karnivool, DEADWING’s music is honest, cathartic, and superbly compelling.

Throughout 2019 and early 2020, DEADWING sowed seeds across the UK by undertaking a series of successful shows. As live music halted, the foursome retreated to their base and began to deepen their sound. Now armed with their powerful new single, The Faceless, the prog rockers are primed to break out from the underground. This cut is beautifully dramatic, arresting, and imposing. Ellis Peberdy (Vocalist) remarks about its creation: “We recorded this track at Airtight in Manchester. This song pushed us in a proggier direction, which was really exciting! Lyrically I wanted something intense and accusatory to fit with the huge riff in the song; it took about a year to finally settle on these lyrics.”

Live dates and further releases are planned for the remainder of the year and into 2022. Latch onto DEADWING now before they take flight.  https://www.facebook.com/deadwingband/ https://www.instagram.com/deadwingband/https://open.spotify.com/artist/1qZDjUpnTjsYK1yTslsmHjhttps://www.youtube.com/channel/UCznzJHpYbj-4xEp0j0-jYiA DEADWING are Ellis Peberdy (Vocals), Jake Lafferty (Drums), Jack Stanley (Bass), and Dragos Colceriu (Guitar).