BAND OF THE DAY: BEDSIT 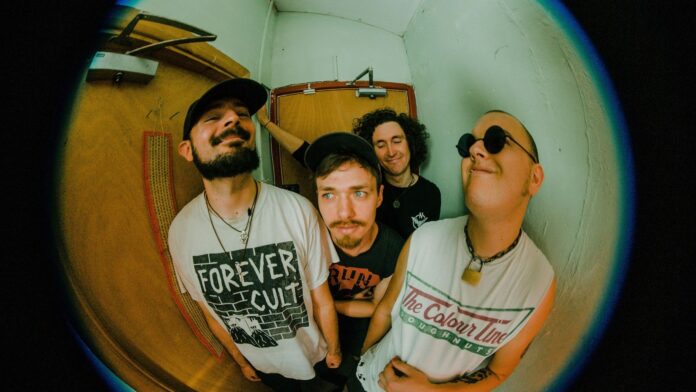 Hull four-piece BEDSIT have announced their debut DEAD BANDS EP will be released on 3 February via their own independent label Forever Underdogs. The four track EP was self-produced in their own Unit 45 studio, mixed by Hull legend Nick Russell and mastered by Pete Maher – Pixies, Nick Cave, Garbage, Jack White, Nine Inch Nails, Glasvegas, The 1975.

The EP will be available on CD and via all major streaming and download platforms including Spotify, iTunes, Amazon, Apple Music, TIDAL, Deezer and Soundcloud. Pre-order the CD and limited T-shirt here:

From the opening feedback-drenched power of Drip Feed to the final chaotic absurdities of Eloquent, you may hear Fugazi, Husker Du, Buffalo Tom or the Dead Kennedys as reference points, occasionally even Discharge in the coruscating guitar sounds, but all four tracks retain an identity that remain unique and consistent to BEDSIT throughout.

“The EP is about the chaos and uncertainty of modern times,” say the band, “the struggle for meaning and motivation. We all have the sense that something isn’t right. We often get cynical and angry. But, occasionally, we get a glimpse of the magical – a moment of ecstasy – and that relief is worth living for.

“This is our first EP as a full band and the title track is a celebration of the heritage of live music. From gigantic rock stars who inspired generations, to local artists who you think never got the exposure they deserved, they were all answering the same calling – blessed release. How those burning passions, die as they may, continue to smoulder in the hearts of strangers, inspiring joy and creativity.”

To coincide with the release, the band will embark on their first full headline tour. Dates as follows:

BEDSIT formed as a solo project in 2019 by Tom Hockney. Struggling with depression and the loss of a friend, he picked up an acoustic guitar and learned his first chords during late nights sat on the kitchen floor. Scratchy phone recordings eventually lead to fully fledged songs in 2020 when Tom recorded his debut solo EP in the bedsit where he lived.

Lockdown hit shortly after the EP release and Tom began jamming in a variety of projects with Casey Stead (guitar) until, later in 2021, George Garnett (drums) and Tom Scanlon (bass) joined the band and brought BEDSIT to life. Together they created songs grounded by their shared love of grunge and allowed outrage and anguish to swell through their soul and their lyrics.

In 2021 when the scene was suffering and many gigs were cancelled or had to go underground, BEDSIT took a risk and booked a date to celebrate the 30th anniversary of Nirvana’s Nevermind by playing the album in its entirety. After much practice, they performed to a sold-out audience and stole the show. Buzzing from that success, the band wrote and recorded their debut single, Go Outside. The song is a cry for help – a plea for freedom – to do away with the stress and uncertainty of modern times and to reconnect with one’s primal humanity. Released in April 2022 under the band’s own Forever Underdogs label, Go Outside demonstrated what was possible for the band to produce themselves.

Since then, the band’s hometown shows have grown in strength and numbers. With three members of BEDSIT working at the New Adelphi Club in Hull – one of Britain’s oldest independent music venues and winner of the MVT (Music Venue Trust) Grassroots Venue: Spirit Of The Scene award in 2022 – the band immersed themselves further into the live music scene. Tom Scanlon left the band and bassist Ciaran Hall joined and they set their sights on recording and releasing the DEAD BANDS EP. That time is almost here and a video for the title track will be released shortly.

And that’s as far as things have gone. So far …