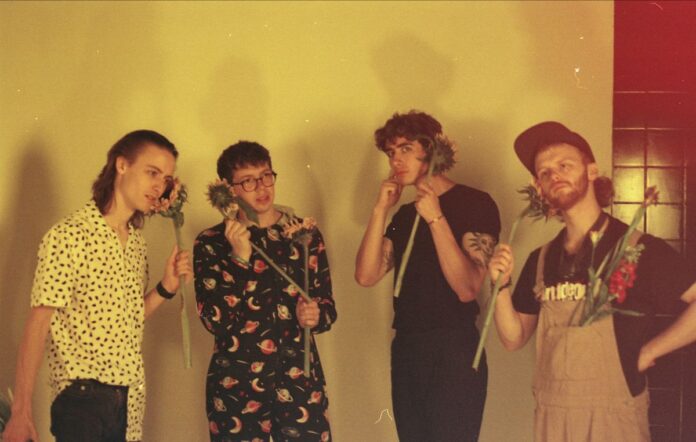 Following a premiere with Rock Sound magazine, South London based “dirtbag boyband” social media sensations, Bears In Trees, are pleased to reveal the video for their new single ‘I’m Doing Push Ups’ which is out now.

The track is the latest to be taken from their recently-announced debut studio album, and everybody else smiled back, released 19th November 2021 through Counter Intuitive Records.

Commenting on the single, vocalist Nick Peters says: “​​’I’m Doing Push-Ups’ is about my first year at university—falling in and out of relationships in an entirely unproductive and unhealthy way, and not stopping to take any time to work out within myself why I felt like if I wasn’t in a relationship I wasn’t whole.”

“The push-ups reference is from a rejected chapter from Catch-22; in an army cadet camp, the main character is told that if they’re seriously wounded in battle they need to do push-ups while waiting for the ambulance to…keep up their strength.”

Fresh from recent support slots with YouTube sensation Noah Finnce, not to mention selling out their own debut headline UK tour dates in July 2021 during a global pandemic (including a 500 cap London show), the band will be announcing further live plans over the coming months.

The track follows on from the release of the album’s lead single ‘Great Heights’ last month, whilst earlier this summer the band released their standalone double AA single ‘Flower Through Concrete’—fans can stream the songs ‘Fresh Concrete’ and ‘Evergreen’ on their preferred music streaming service here.

Despite a huge following on social media and streaming services leading to an already impressively hungry fanbase, the tracks saw the band picking up their first attention from press with the likes of BBC 6music, Rock Sound, CLASH, Louder Than War, Brooklyn Vegan and a host of blogs pledge their support for the band.


Debut album ‘and everybody else smiled back’ is released 19.11.21 via Counter Intuitive Records

Beginning in a South London basement in late 2014, the band – composed of vocalist and bassist Iain Gillespie (they/them), guitarist Nicholas Peters (he/him), drummer and producer George Berry (he/him) and vocalist, ukulele and keyboardist Callum Litchfield (he/him) – grew up as teenagers together on a diet of online fandom, mid 00’s emo-pop, and the golden age of One Direction. They wrote music from their basement hoping that someone would listen.

Nearing seven years later, over 365k Tik Tok followers, 180k Spotify followers and 100k Instagram followers would come to find solace in the band’s unique blend of online irreverence, absurdist humor, and dedication to fostering a community that keeps each other safe – this is without mentioning the songs they’ve written about working in gay bars, becoming friends with worms, and processing the deaths of close friends.

Described by the band as a concept album, and everyone else smiled back is a living story—it’s about walking through college house parties as the world is ending around you and then, the day after, the everlasting love you feel as the lights are fading in your energy-saving bulbs.

The album deals with themes of first-time independence, sexual and emotional trauma, and picking your friends up in the aftermath. The best, and worst, day of your life always has a day after.

The album title is a paraphrased quote from the book ‘The Secret History’ by Donna Tartt, in which a classics student at a liberal arts college in Vermont goes to a college party for the first time, takes MDMA and says of the experience: “I smiled at everyone and everyone smiled back.”