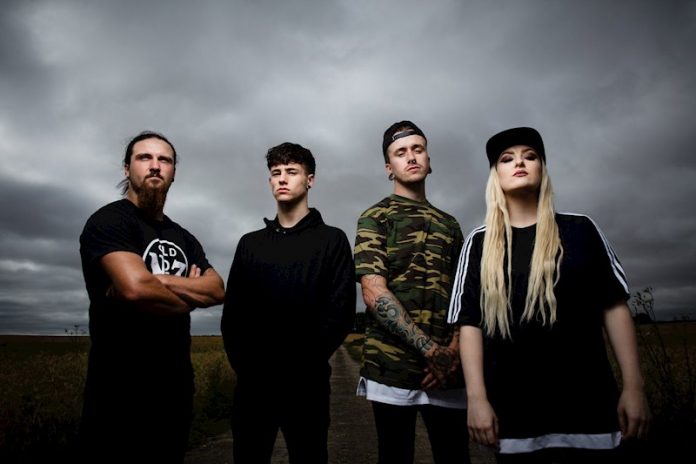 VNDTA serve up a gratifyingly fiery fusion of hard-hitting riffs, gut wrenching vocals, and raw honesty.
In absorbing a slew of influences from Thy Art is Murder, Peripheryand Pantera, through to No Doubt,VNDTA have created a sound that is both original and formidable. The band release their explosive new EP, Pale Glow, on Friday 13th April. Before then, the metal crew drop a new track, Martyr.

Although the Hertfordshire quartet were formed in 2015, it’s been within the last year that the band’s profile has vastly increased. A flurry of recent highly successful shows throughout the country, as well as supports with Aghast, Vanity, King Leviathanand Confessions of a Traitorhave served to raise their stock. Besides concentrating on touring, the alt-metallers have also worked diligently on their debut release.

During the recording of their forthcoming EP, Pale Glow, the band suffered some challenges. Vocalist Megan Targett comments: “Recording the EP was probably the most difficult week of my life. We were broke, spent weeks living in my car, I ended an abusive relationship and lost a family member. But it didn’t stop me. We used the pain to fuel raw passion into the vocals and the music”.

VNDTA are now primed to release the EP, and the record instantly smacks you in the face. Built around Willem Mason-Geraghty’s beats which rattle your bones to the core, combined with Megan Targett’s mightily impressive vocal range, calling to mind everyone from Angela Gossow to Cristina Scabbia, and with Callan Hughes’ and Jay Bacon’s pounding riffs that hammer and complement each other in equal measure, the band are an undeniable talent. The opener and EP’s namesake, Pale Glow, is a breath-taking start. One of the strong highlights of the EP is the track, Swine, which illustrates the sheer power and diversity of Megan Targett’s vocals. Martyr is another cut that leaves an imprint as it twists and contorts with bellowing riffery and potent vocal lines. The hugely intense and engulfing, Virus, closes the EP in supreme style. With extensive touring in place and with more dates to be announced, VNDTA’s ascent is sure to be swift, and their reach could be limitless.