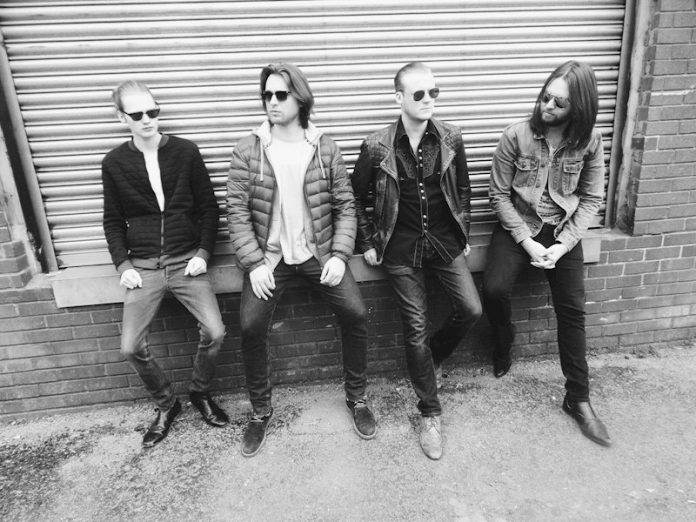 By bringing together twisted angular rock, with an edgy immersing groove, DARK STARES have produced an intoxicating sound that takes from a vast range of areas, spanning from Queens of the Stoneage, Muse, and Royal Blood, through to Led Zeppelin and The Beatles.

The much-praised alt-rock combo release their breath-taking debut album, Darker Days Are Here To Stay, on Friday 11thMay. In anticipation, the quartet have dropped a lyric video for Sweet Rider 5 –

Having gained worldwide airplay, press and recognition with their past EPs, Tell Your Friends, Octopon, and 2014’s Soul Contract, DARK STARES have amassed a loyal and budding international fanbase. The St Albans’ foursome have opened sold-out shows for Enter Shikari and The Darkness, as well as releasing a slew of captivating music videos, such as 2012’s Bad Machine(https://youtu.be/r6FUrJnZU1E ), which was selected by Dave Fanningand Bono for U2 single promos.

DARK STARES are now braced to release their eagerly anticipated debut album, Darker Days Are Here to Stay. Partly recorded in the band’s personal studio, the album keenly illustrates not only the group’s rich songwriting prowess, but their ability to express their true creative exploits. Vocalist Miles Kristian Howell remarks: “‘Darker Days Are Here to Stay’ was a coming-of-age recording process for the band. Dark Stares have always been obsessed with self-producing, DIY tracking, and even rehashing professional mixes to make them sound ‘dirtier’, more low-fi or add new layers and ideas. Recording in our own studio was claustrophobic at times, challenging but a rewarding evolution for our sound. We took our time, carefully crafted new homemade tracks and it feels great to have our debut album out there at last, and we hope our fans will embrace it.”