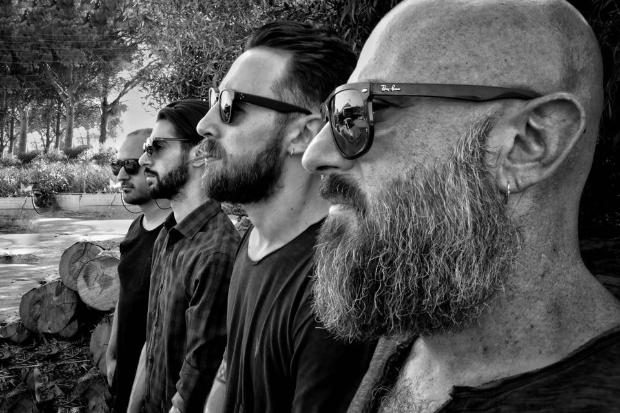 Arcadian Child were formed in Limassol, Cyprus, in 2013. Psyched, potent and intoxicating, they deliver daunting guitar-orientated psychedelia blended with ambient elements, hallucinogenic patterns and cathartic outbursts.
With sounds rivaling the squealing sirens of the Mediterranean up to the dark bellows of the West, Arcadian Child convey their psychedelic ritual in their jam-filled live shows where they spread their hypnotic vibrations. Their debut album, “Afterglow” originally self-released on bandcamp the 29th of October, 2017, was widely acclaimed and received compelling support from the international psych/fuzz scene.
Now Ripple Music is thrilled to welcome the lads to Rogue Wave Records, the new imprint of Ripple designed to focus on psychedelic/garage rock.  Bringing a new sense of melody and dynamics to the rock that Ripple is already world-famous for, Rogue Wave Records hit the scene 2017 with two releases, the Top 10 Album of Year “Pop Guilt” by Australian legendary garage/noise poppers, Screamfeeder, and “Come Down from the Mountain” by fellow Aussies , Sacred Shrines.
Of signing to Rogue Wave Records, Arcadian Child said, “We are stoked to announce that we signed with Rogue Wave Records, the psychedelic/garage imprint of the mighty Ripple Music. We feel blessed to join the Ripple Music family, and be part of the umbrella that hosts bands we love such as The Flying Eyes and Mothership and have “Afterglow” released on a limited edition 12′ vinyl and digipak in the summer. We are currently working on a concept album inspired by the hermetic philosophy, contemporary stimulants and challenges which is to be released later in 2018 by Rogue Wave Records. This is our attempt in decoding today’s challenges after taking a deep dive into our subconscious.”
“Afterglow” will be available world-wide on vinyl, CD and digital, and available via the complete distribution network of Ripple Music, as well as the Rogue Wave Bandcamp and Webstore pages.  Follow Rogue Wave Records on Facebook to learn all about the latest in psychedelic/garage rock.
Look for “Afterglow” to hit the streets late this spring.  Then let you mind run wild.
The Band
Panayiotis I.G – Vocals, Guitars
Stathis Hadjicharalambous– Guitars
Andreas Kerveros – Bass, Backing Vocals
Christos Dimou – Drums
Arcadian Child Facebook / bandcamp