Balls To Cancer. And Balls To The Mainstream. 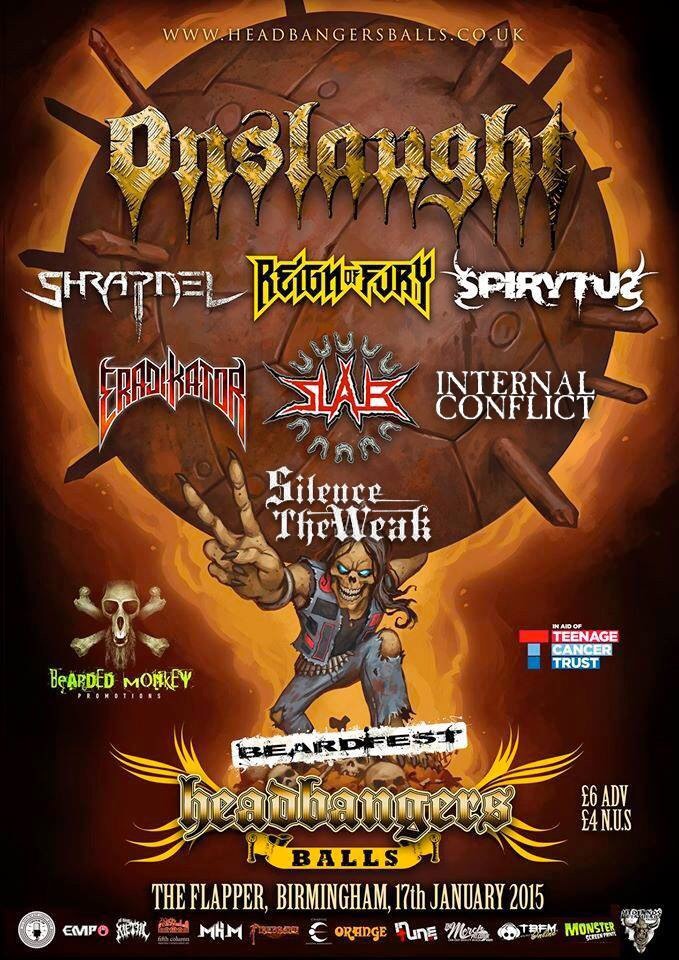 The tour that proves that metal cares, and that it doesn’t need the media to thrive. We speak to the man behind Headbangers Balls

For the last few years the great and the good of heavy metal have got together to raise their middle finger in the air to cancer. And why? Simply because they can.

The story goes that back in 2008 Bison Steed, frontman with brilliant metal band Reign Of Fury, was diagnosed with testicular cancer. When he received the all-clear he didn’t just sit around thanking his good fortune, rather he decided to do something to help others.

What he did was team up with Andy “Sarge” Pilkington an experienced PR man and rage toe came up with the idea of a tour that would take in some of the finest names in metal and criss-cross the country to help the fight against this disease with a huge series of charity gigs .

It has done just that, with over £10,000 raised so far, despite what has been apathy from the mainstream media. Earlier this year it was announced that the 2014 tour was to be the last – all those involved have what might be termed “proper jobs” and families – so it was decided to go out on the highest of highs, as Sarge explains: “For me it’s been a huge priority to make this year’s tour as positive as possible in the public eye so we can leave a legacy of success when it comes to charity in our music scene.”

In fact, the 2014 “legacy” as he puts it, is one of which he can be rightly very, very proud. Speaking to Pilkington now, he is almost modest about his achievements, adding when coaxed: “Our Kickstarter campaign reached 100% funding within 3 hours, and smashed 300% by the end. We more than doubled our biggest audience from last year in Manchester, we’ve got much bigger bands with the likes of Lawnmower Deth and Onslaught.” The latter of these groups headline the last ever Headbangers Balls show, in Birmingham on 17th January.

Then there was the small matter of a world record…..

This writer – who has lost a mother, a couple of grandparents and an Auntie to various forms of cancer over the last two decades – was proud to be part of the campaign to get the biggest ever status update on Facebook, to say, rather succinctly, Balls To Cancer. We managed it, of course, metal always finds a way after all. But even this smashed all expectations: ” we did it throughThunderclap,” says Andy. “And sought to garner a sign up of 500 people in a week, when normally they advise aiming for 250 in a month. We ended up reaching 500,000 people in an instant when it launched!”

This success is all very well, but it’s the real tangible on the ground work that really matters and here too, there is much to be proud of, as well as the £10,000 raised by the tour, Andy is delighted that Headbangers Balls has inspired many to work on their own projects: “We’ve also encouraged others to fundraise themselves for our cause, and helped them do so, in those people alone have raised over £7000 for Teenage Cancer Trust,” he says with an understandable sense of pride.

Given that, then you would think that the media would be falling over themselves to get on board and spread the word. You would wrong. Changes to Facebook mean the amount of people who see posts is limited, but worse is the lack of support from the mainstream rock press. In 2013 help was promised then “pulled from under us,” is all Pilkington will offer.

Beholder frontman Simon Hall was a touch more forthcoming at the Birmingham event last year, launching into a long a vitriolic rant at those involved, for this last hurrah, then it was decided to not only wave two fingers to cancer, but also at the media and just get out there and do it themselves: “The point for me this year was to build a tour that didn’t rely on those mainstream supporters so we’ve done it alone without even asking those people for help, and it’s been extremely successful,” says Pilkington as he looks back at a string of huge events this time around.

But this was never just about music after all as man who claims on the official website for the tour to bring his “ball busting blagging skills to the event” is quick to finish with: “More importantly, he says firmly. “Behind the scenes we’ve been able to support a few people who are worried about, or have cancer. There’s a clear case where we’ve actually led to someone getting life saving treatment, which makes this far more important than just the shows.”

There is one more chance to say “Balls To Cancer.” Please take it by attending the show at The Flapper, Birmingham on 17th Jan 2015.