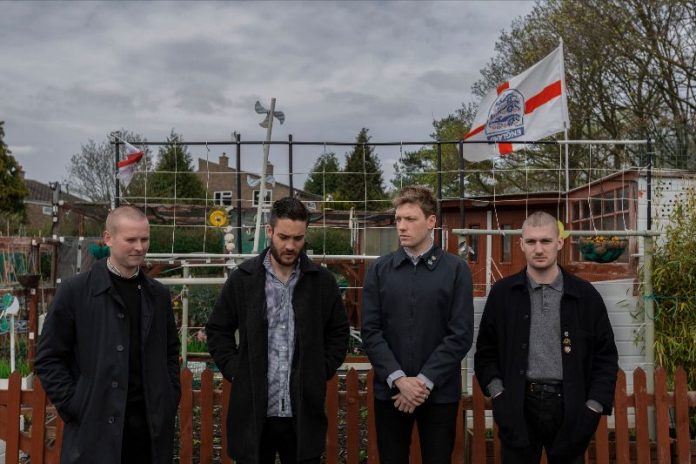 The timing of Bad Breeding‘s statements on living and working conditions in the UK could not be more relevant right now as the British political system dissolves in front of a world audience. Explosive noise-rock single, Theatre of Work is their latest message from their forthcoming album, Exiled released on June 21st via One Little Indian Records.

“The noxious smog of neoliberalism has been most poisonous in the conditions of my working life, where capital dominates and the chance for genuine human flourishing has been shackled by the entrenched suffocation and manipulation of the labour market,” explains Dodd. “This song explores the theatre of being tied to agency work and zero-hours contracts, dogged by insecurity, stripped of confidence and laid bare to the laughable fatalism of being exploited by the very concepts you’re taught as necessary to your own survival.”

As with their previous full length ‘Divide’, new album Exiled was recorded by Ben Greenberg, member of NYC industrial punk duo Uniform and studio engineer of punks’ repute. Completed within a week, it’s more organic in conception than its predecessor, noise shaped from guitar feedback rather than digital post-production.

Bad Breeding have always aimed to channel their own anger rather than speak for a community; float the possibility of working class solidarity, socialist principle and direct action, as opposed to haughtily insisting on those things as markers of Acceptable Politics. Equally, it’s possible to listen to ‘Exiled’ and merely be swept along by the tide of distortion, never mind the lyrics – but you’d be missing a trick. An essay, titled ‘How Pure Is Your Hate?’ and packaged as an insert with the album, sets out their stance for anyone who couldn’t quite catch the words: polemic that’s articulate without resorting to high-minded academic jargon.