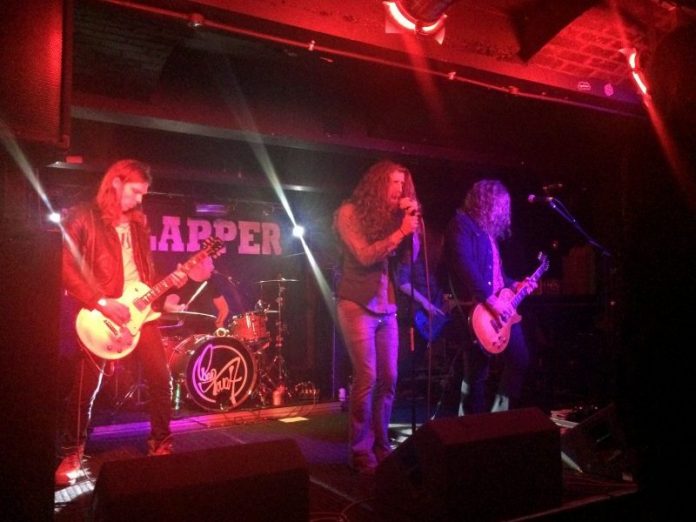 It has always struck MV as one of the cruellest ironies of them all that The Flapper, an old pub on a cobbled street at the side of one of Birmingham’s canals, is right opposite National Indoor Arena, on the same street as the city’s Symphony Hall and just up the road from it’s Town Hall, so that the band’s that play the basement room – with room for a couple of hundred people – are reminded almost of where they want to be.

And therein lies the other problem. It should have been four, but Massive, the Aussie pocket rockets that moved over to the UK to be closer to the action are rather MIA here amid rumour, but officially “unforeseen circumstances”.

No matter, though because there’s a stellar support cast for this too. And if you can judge a band by the t-shirts they wear then Signs Of Fire have good taste. Pink Floyd, Kiss and Honeymoon Disease is pretty stellar after all. Of course, SoF themselves have become welcome fixtures on the scene recently, by virtue of being excellent. Equipment failures tonight rather disrupt their flow but there is no denying their ability to make “The House Of The Rising Sun” their own, and there’s no denying the power of work like “The Blacksmith” and “Cain And Abel” either, and they are back well on track by the time “The Preacher Reigns” hits. They will have better nights than this, for sure and nights when their amps don’t let them down, but ultimately nothing can disguise the fact that Signs Of Fire have all the signs of a band going places.

Lets be honest it takes balls to cover Phil Collins’ “In The Air Tonight” and it takes real chutzpah to segue it into “Rebel Yell” and back again, but clearly confidence isn’t something Without Grace are short of. Their own songs are better than the covers too – there’s another in “Blame It On The Boom Boom” when actually originals like “Guiding Light” and “From Heaven Or Hell” are what they should concentrate on. As musicians they are simply too good, and have too much stage presence to play other people’s songs. An interesting, entertaining and compelling half an hour, from a band that evidently has a much potential and a lot more to come.

The cover of “Highway To Hell” (“we know some of you came for some Aussie rock” says Bad Touch singer Stevie Westwood in that effortlessly charming way he has) is a nod to the fact that Norfolk’s finest are closing the show on their own, and “Tell Me Where You Buy Your Jeans” is a song about wearing women’s trousers (“I find it hard to find flares, I nicked these from my ex girlfriend” offers Stevie) but most of tonight’s set is about looking forward.

Forward to “Truth Be Told” a quite wonderful new record that comes out this week. And this in itself presents the final issue for the night. MV might have heard it reviewed it, loved it and be fully familiar with its glory, but most aren’t as lucky as us. It says much for both the quality of the songs – and the five men playing them – that this doesn’t seem to be be a barrier to enjoyment.

They start with a newbie, “Heartbreaker Soulshaker”, play another “My Mother Told Me” and add a load more where they came from. “One More Night” rather re-enforces the idea that Bad Touch are a British take on The Black Crowes, but “Waiting For This” rather subverts that lazy theory by adding some Led Zep flourishes (there’s a cover of “Whole Lotta Love” before the end too) and “Wise Water” from their debut album is southern rock done right.

It’s the current single “99%” that, like on the record, astonishes, and when that it is coupled with “The Mountain”, which is a real departure for them, and like on the album, closes things here, then there is a suspicion that Bad Touch might be equipped with the tools for a major breakthrough;

Bad Touch have the talent – and in “99%” they have a knockout killer of a song. With an album this strong under their belts and out on Friday, they might not always be casting envious glances at the arenas across the road. Maybe, just maybe.