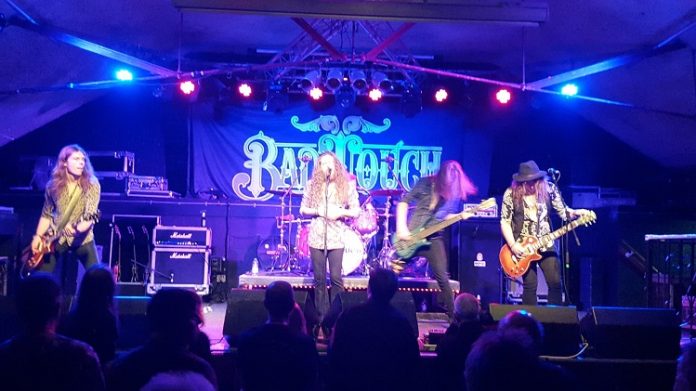 Given that most of Daxx And Roxanne are merrily dancing away throughout Bad Touch’s set tonight, I think we can safely say that even if they weren’t onstage, they’d have been happy just to be here with – as their last album put it – a Ticket To Rock. The Swiss band, now based in London, have a sound that suits that no frills, loving life, type of approach too. Hard rock the way it should be. Free of pretension, full of skill and with an eye for fun. The opener, the aforementioned “….Rock” sets the tone and its needles in the red, throttle fully open and no stopping stuff. In Cal Wymann they have a rock god type lead player, and he offsets singer/bassist Cédric Pfister perfectly. “Interstellar” is a little gentler – AOR for want of a better term – but it is the high energy ones that particularly suit them. “Hard Rocking Man” is all AC/DC grooves until they get a harmonica out and it’s pick of the bunch, while their half hour ends with “Wrong Side”, by which time Pfister is confident enough to organise a crowd singalong. Daxx And Roxanne strike you as a confident bunch about most things, though and you can expect to see a lot more of them. 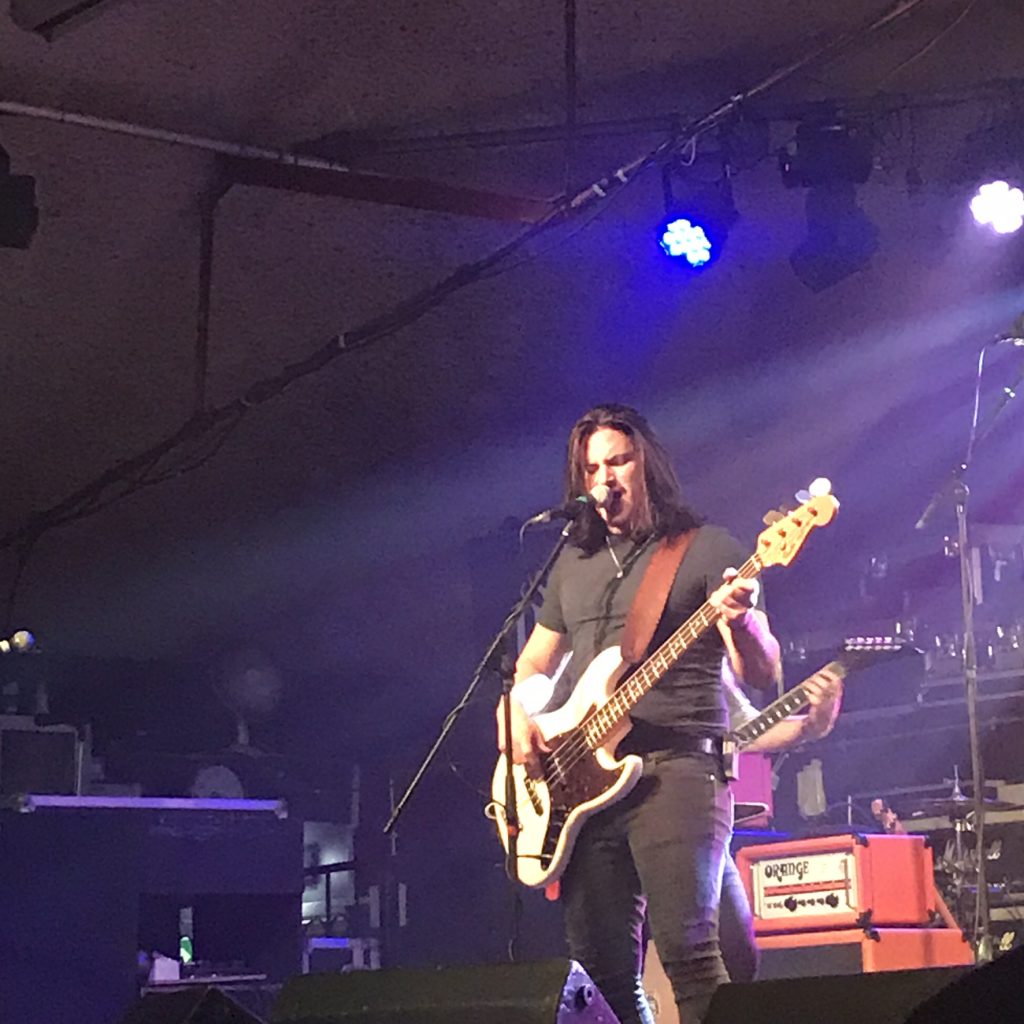 Aaron Buchanan And The Cult Classics have reached the end of the tour and they are in mischievous mood. “Did anyone see our guestlist tonight?” asks the frontman, “Paul Skinback, are you in the house?” This is more than just a weak double entendre, though. It is perhaps indicative of a band that knows its only rock n roll and doesn’t need taking too seriously. The Cult Classics released their “Man With Stars On His Knees” album last year to raptures (not least on this site) and they intersperse some of its key cuts like “Left Me For Dead” and “The Devil Needs You” with some stuff from when Buchanan was in Heaven’s Basement. “Fire Fire” and “Heart-breaking Son Of A Bitch” among them. That they also do a medley of covers in “Dancing Down Below” (credit to them for dusting off “My Sharona” in fairness) might usually indicate a lack of ideas, here though, it seems they just want to have fun.  Guitarist’s Laurie Buchanan and Tom McCarthy are supreme and with the other Buchanan in his best Freddie Mercury style form, it does appear that The Cult Classics might not be a cult band for much longer. 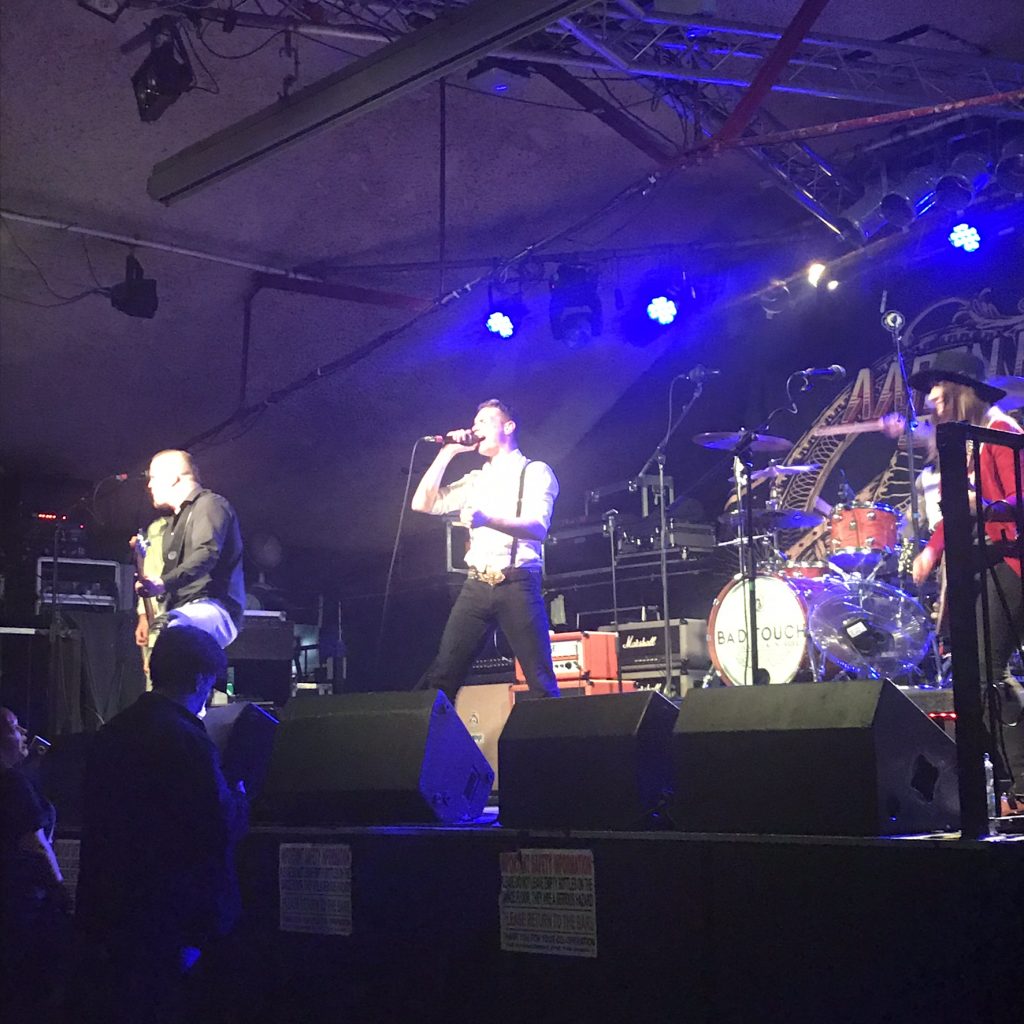 There isn’t many outfits that have paid their dues for longer than Bad Touch. After being support to everybody, and with three great albums, this is their biggest headline tour. As they play the last in their main set tonight “Down” singer Stevie Westwood smiles: “this is the oldest one we still play, from when we were young and full of beans.”

They aren’t grizzled old veterans just yet, however. indeed, their hour tonight might be the best I’ve ever seen them do. The new songs from their brilliant “Shake A Leg” record have fitted seamlessly into the show. The band are sure enough of them to play three to start. “Show Me What It Means” is perhaps the pick, but then they’ve always had the ability to write fine tunes as “Good On Me” proves. They add ZZ Top’s “Sharp Dressed Man” to this too, and if ever a band was born to cover this it is BT.

“My Mother Told Me” is joyous, “Skyman” is the best thing on the new record and “Outlaw” takes the theme of Bon Jovi’s “Wanted (Dead Or Alive)” and updates it, as Rob Glendinning on lead guitar shows his prodigious skills. In between, they show that whatever success they get they are still humble, dedicating the ballad “Believe In Me” to a woman in the front row because her partner had asked Westwood earlier – worth mentioning because they still retain that bond with their audience.

“Dressed To Kill” the new album’s anthem, would usually act as an encore but doesn’t here because of time constraints before “99%”, their best thing – and moreover, arguably the catchiest song written in years – ends things.

Festivals all over the place, and a Monday night perhaps means that the crowd isn’t as big as Bad Touch deserve to see the end of the Shake A Leg tour, but if ever a band lived by the maxim shake it till you make it, then it’s Norfolk’s finest. Bad Touch, as always, have a touch of class.

Previous article
GLENN KEEPS UP WITH THE JONESES
Next article
REVIEW: COLLATERAL – 4 SHOTS (2018)