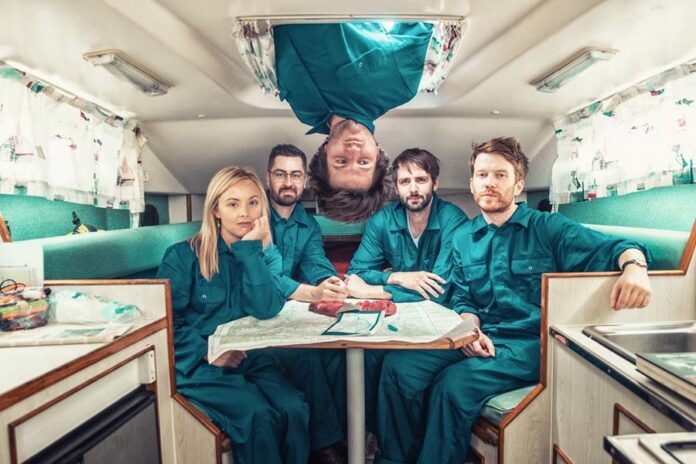 Pre-order the album here, including a very special Dinked edition of the record featuring alternative sleeve art, a bonus 7”, clear vinyl and a lyric insert.

Last month Silverbacks announced their signing to Full Time Hobby and shared a brand-new single, “Wear My Medals”, of which Stereogum said: “Silverbacks move like one, wild-limbed organism, and they don’t really have a bad song to their name yet. Everything they do just hits, and “Wear My Medals” is no different.” It was the first new material from the band since the release of last year’s acclaimed – and Choice Music Prize-nominated – debut album Fad, and merged shifting textures from wiry guitar noodling to flute-flecked interludes via scratchy chords. Continuing to demonstrate an element of unpredictability to all that they do, latest offering “Archive Material” pairs a jerky stop-start rhythm with gang vocals and moments of French language. Vocalist and guitarist Daniel O’Kelly comments further on the song.

“The initial demo version started from a drum sample taken from the opening of Jean-Pierre Massiera’s “Bonne Annee”. When we fleshed it out as a full band and Gary gave the track his usual kick up the arse, the song went full Les Baxter exotica mode.

When writing the lyrics, I imagined a bunch of government officials in the deep underground of their building digging into archives. As the night continues, they get unusually aroused by the access they have to top secret information that the common folk never see.”

Silverbacks begin a headline tour in Ireland and the UK later this month. Full dates below. Tickets are available here.

Archive Material only cements Silverbacks’ status as one of Ireland’s most fascinating bands. Recorded at Dublin’s Sonic Studios in November 2020, with Daniel Fox undertaking production duties once more, it finds the band leaning into their early influences, delivering idiosyncratic indie-rock packed with intricate, Tom Verlaine-esque “guitarmony”. Other reference points for the record included Neil Young, Weyes Blood and – on ‘Wear My Medals’ in particular – Bradford Cox and Cate Le Bon’s collaborative record Myths 004.

Where Fad found Silverbacks focused on recapturing the live experience rather than reveling in studio experimentation, Archive Material skillfully traverses the line between the two. As a unit, they replicate that irrepressible live energy via complex arrangements incorporating everything from wistful Rhodes (‘Carshade’) to congas and Gang Of Four-style bass (‘Different Kind Of Holiday’).

Thematically, the record is every bit as rich, displaying an anthropological approach as exemplified by the album’s artwork. The initial premise for ‘They Were Never Our People’ came from a YouTube comment, portraying the decline of a town that has lost its footfall as the result of a bypass. Meanwhile, ‘Central Tones’ is an empathetic character study of someone seemingly content to trade off former glories, but secretly deeply unhappy.

On several songs, the pandemic functions as a particularly effective prism through which to examine ideas of community. ‘A Job Worth Something’ finds Daniel reflecting on his real-life experiences working in insurance while his sister treated patients on a COVID ward, and the feelings of futility and guilt he felt at the time. ‘Different Kind Of Holiday’ was inspired by the ways in which previously uncommunicative neighbours bonded with each other during periods of enforced confinement. Throughout, his observations arrived drenched in the same surreal strain of gallow’s humour that many of us were forced to adopt to lighten the toughest moments of the lockdown.

Daniel explains, “I can’t remember who it was, but I saw a musician who said that they’d be keeping away from writing anything about the pandemic, because who wants to hear about that? But I’d much rather hear about an event via someone who actually lived through it, rather than someone writing about it retrospectively.”

Keenly observed and vividly rendered, Archive Material is an eye-witness account of human resilience as much as it is a compelling indie-rock record. Future historians take note.