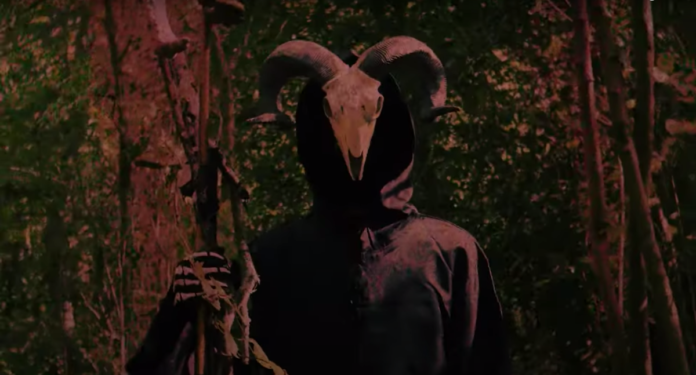 Psych-rockers Longheads have released the video for their latest single ‘One Step Further’, which is taken from their forthcoming EP Mars Doesn’t Feel Like Home Anymore and is coming out November 2nd via Longreel records (pre-order here).

WATCH THE VIDEO FOR ‘ONE STEP FURTHER’ HERE

The video is tongue-in-cheek with folk-horror inspired visuals, which shift between horned demons and druid band members summoning the spirits of psychedelia. The track itself being the perfect accompaniment as it transports us to the outer realms with its lo-fi vocals echoing between the spaced out orchestration of punchy drums and reverb rattling guitars transcending the listener to a higher plain.

With the track, the band were experimenting with ‘through-composed’ song structures, which is a continuous, non-sectional and non-repetitive piece of music and showcases the bands talents as fierce instrumentalists and masters of their craft.

Lead singer and bassist Sam Mitchell says, “‘One step further’ serves as the pre-amble to the narrative contained within Longheads’ upcoming E.P Mars doesn’t feel like home anymore. The song depicts the unfolding of a siege, the beginning of the end. This can be felt within the dynamics of the instrumentation which build to a grand crescendo to conclude the battle.”

It follows the release of the EP’s first single ‘Longherder’, which is a lysergic slice of King Gizzard infused groove drifting between sanguine moments reminiscent of The Doors and expansive guitar solos of Hendrix. Listen here.

Mars Doesn’t Feel Like Home Anymore follows the release of 2021’s debut EP Higher Than Bacteria. The new EP has seen the band take a much looser approach when it came to both writing and recording, incorporating improvised jam sections and capturing the band’s incredible live energy to the songs on record.

Longheads are building a name for themselves as an impressive live act and recently played yet another stellar show to a packed out Bermondsey Social Club, as well as recently supporting the likes of King Buffalo.

Now to celebrate the release of the forthcoming EP, they will be headlining the Black Heart on November 24th with tickets available here.

You can watch a session recorded live at the Longreel Studio here, which will give you a taste of what to expect.