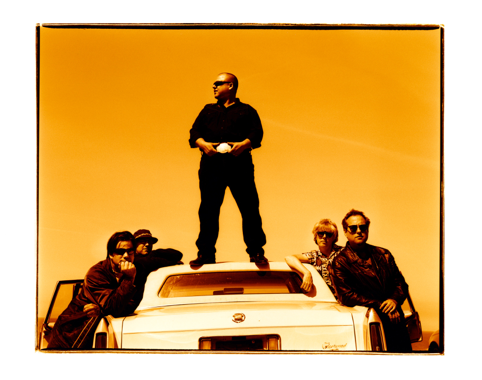 On 20th  January 2023 Demon Records release two Frank Black And The Catholics albums, which have never been previously available on these vinyl formats.

Between 1998 and 2003, Frank Black and Co. released six albums under the ‘Frank Black And The

Catholics’ moniker. All recorded live and direct to two track tape, the music created with the

Catholics is some of the most energised, raw, and essential of Frank Black’s career. ‘Snake Oil’ is a

collection of cover versions recorded in the studio during this prolific period.

Highlights include thunderous takes of Bob Dylan’s ‘Changing Of The Guards’, Bruce Springsteen’s

This is the first physical release of ‘Snake Oil’, and has been newly remastered by Phil Kinrade at AIR Mastering, with new artwork featuring photographs by Steve Gullick.

Recorded on tour in support of 2001’s ‘Dog In The Sand’ album, ‘Live At Melkweg’ captures Frank Black And The Catholics at the peak of their powers, tearing through an expansive setlist which touches on all corners of Frank Black’s vast catalogue.

An essential release for Frank Black fans, ‘Live At Melkweg’ marks the first time a complete Catholics’ show has been officially released. This newly expanded edition features the 38 song show in its entirety

Highlights include a haunting take on Pixies ‘Gouge Away’, Frank Black classic ‘Headache’, and selections from the Catholics’ repertoire including ‘I Will Run After You’ and ’21 Reasons’ which would later be recorded for their acclaimed ‘Black Letter Days’ album.

Newly remastered by Thaddeus Moore at Liquid Mastering, ‘Live At Melkweg’  is housed in a deluxe triple gatefold sleeve with spot UV detailing.

To pre-order ‘Snake Oil’ and ‘Live At Melkweg (Expanded Edition)’ go to: https://frankblack.lnk.to/vinyl