Babymetal On The Night Train 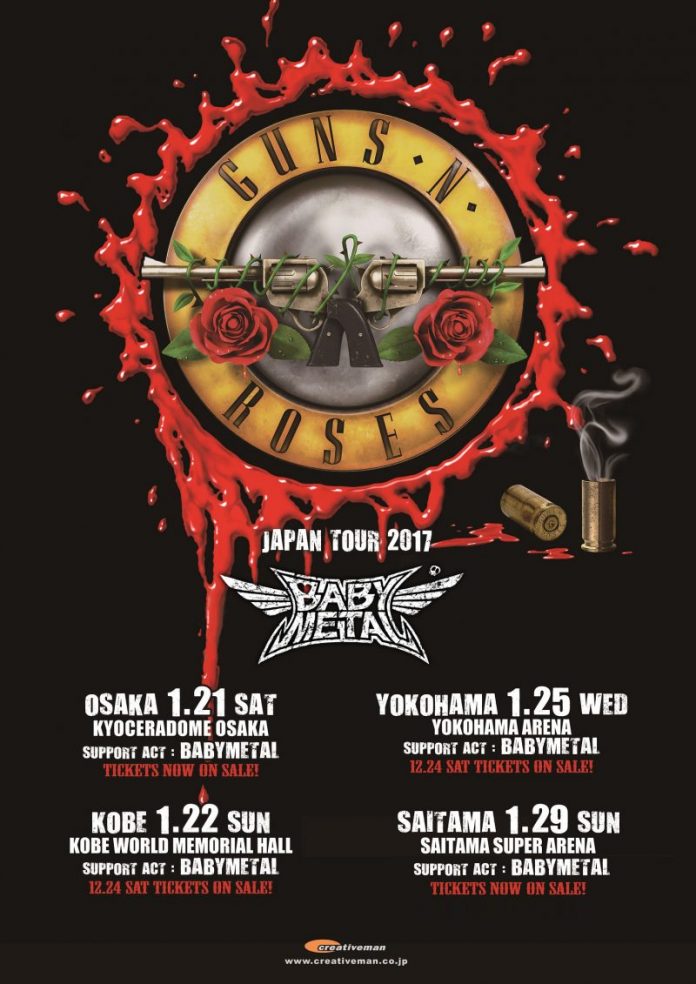 Following their recent UK support slot announcement for Red Hot Chili Peppers, which kicks off next Monday at London’s O2 Arena, Japanese dance metal phenomenon BABYMETAL are excited to announce they will open for LA rock legends Guns N’ Roseson a four-date tour of Japan in January 2017. These Japanese dates are an extension of Guns N’ Roses current “Not In This Lifetime…” tour – the first to feature original members Slash and Duff McKagan reunited with singer Axl Rose since 1993.

Says SU-METAL:
“I am really happy that we’ve been confirmed as support on the upcoming Guns N’ Roses tour. And it’s happening in Japan!!  We’re going to create a live performance that shows how wonderful Japan is together with everyone in the audience on that tour.”

The tour dates are as follows:

This Guns ‘N’ Roses tour support announcement follows a string of accomplishments for BABYMETAL this year, including headlining their biggest shows to date in Japan, playing to 110,000 people over two nights at the Tokyo Dome. In the UK, achievements include their first ever UK Arena headline show at the SSE Arena Wembley in April 2016, winning Best Live Act at the AIM Independent Music Awards, and more recently, featuring on their first ever Kerrang! magazine cover, which is available to buy in shops now.

BABYMETAL recently announced the release of a new “Live At Wembley” album on December 9th via earMUSIC/Edel. With a carefully selected tracklisting, the CD captures the spectacular performance recorded at BABYMETAL’s first ever UK Arena show, “BABYMETAL WORLD TOUR 2016 kicks off at THE SSE ARENA, WEMBLEY”.

The show saw BABYMETAL become the first Japanese artist in history to perform a headline show at THE SSE ARENA, WEMBLEY, garnering an attendance of 12,000 people, where BABYMETAL also broke the merchandise sales record of the venue, the same week they hit number 15 in the UK charts, the highest chart position for a Japanese band in this country.

Preorders of “Live At Wembley” – released digitally on December 30th – are available on iTunes at the following link: http://smarturl.it/BMWembley_iTunes

The release coincides with their sold out UK tour as special guests to RED HOT CHILI PEPPERS. Catch them at the following shows: