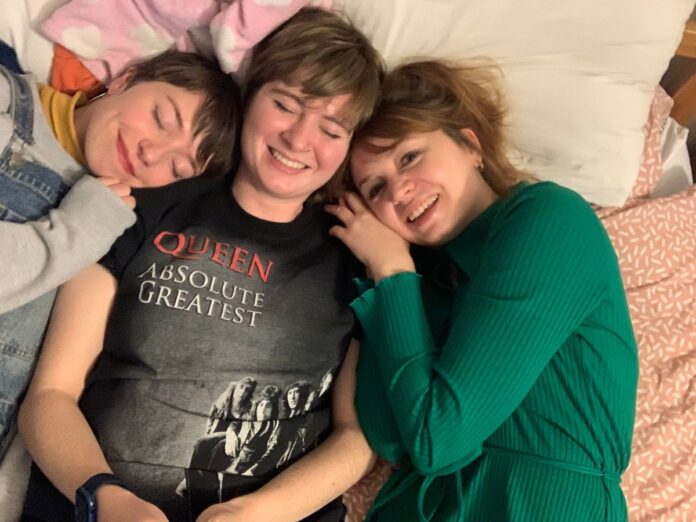 London indie punk trio cheerbleederz are delighted to announce their return with the news that their debut album even in jest will be released Summer 2022 via Alcopop! Records.

“We are so excited to share our debut album this year!” enthuse the band on the news. “It feels like a long time coming, as we started working on it in lockdown in 2020, writing, rehearsing, and recording in the pockets of time when we could. It further bonded us at a time where being creative and having a collective output became more important than ever. These are our favourite batch of songs yet—full of character, hope, energy, misery, introspection and rage, we wanted to write complex songs that reflected our complex selves!”

To celebrate the announcement, the band are thrilled to reveal lead single ‘cute as hell’ set for release on 14th February 2022—a fizzing new anthem dedicated to those thirsty early stages of a new crush, perfectly timed for Valentine’s Day.

Driving, fun and catchy as hell, you couldn’t go so far as to say that this is a comeback (as the band have been working non-stop behind the scenes since their 2020 EP, lobotany) but with this brilliant new offering it’s safe to say that cheerbleederz are firmly back in business for 2022.

“It was hard to choose a first single, but releasing ‘cute as hell’ on Valentine’s Day felt right,” continue the band on the new track. “It’s an anti-commercial ode to fancying somebody and having no idea what’s going on in their head. It’s also about how scary love is, because you have to give up control and surrender yourself to this tidal wave of impulsive emotion. When we were working on the album, ‘cute as hell’ was literally the last song we wrote; the lyrics are playfully ironic and also have a constant kind of manic energy that definitely stems from the deep, restless depths of the pandemic.”

The new track is the first taste of new material since 2020 single ‘sometimes i cry at work’, which landed cheerbleederz a cover shot on Spotify’s Hot New Bands playlist and a spot on The Rock List, plus key radio support from John Kennedy (Radio X) and Tom Robinson (BBC 6music).

With early live appearances at Manchester Punk Festival and Switzerland’s inhumano Fest, alongside tours with contemporaries The Winter Passing, flirting. and ME REX already notched up, the band drew early praise from the likes of DORK, UPSET, CLASH, BBC Introducing, God Is In The TV Zine, Loud Women, Already Heard, For The Rabbits, Austin Town Hall, and a host of underground blogs and zines.

Already boasting a fine pedigree of lo-fi underground hits between their individual members’ various bands (Fresh, ME REX, and Finish Flag), with their new project the trio have hit upon an instantly infectious brand of no-frills, melody-driven punk. Taking influence from the likes of The Breeders, Snail Mail, Hop Along, Alvvays, Charly Bliss and Cayetana, their songs touch thoughtfully on the lived experiences of women and marginalised people.