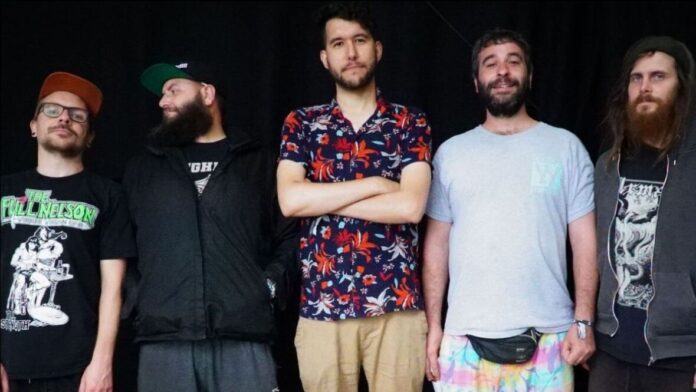 Fresh off a controversial comeback with a twist in tonality, melodic hardcore veterans DARKO unleash ‘AUX’, a scathing attack on embedded selfishness in the UK.

This impassioned second single is available today on all digital platforms ahead of this autumn’s new EP ‘SPARKLE’ via Lockjaw (EU) and Thousand Island Records (CA).

“Our world isn’t built for compassionate people. Suffering is not a bug of our economic system, it’s a feature of it” said singer Tom West. “Our culture tolerates and actively celebrates perverse selfishness. I don’t think it’s your fault if you’re sad and angry all the time. It’s quite an appropriate response.”

West cites Conservative government Minister Michael Gove’s chilling proclamation that “the people of this country have had enough of experts” as a major inspiration for the song’s misanthropic themes, but offers some light at the end of the tunnel in the song’s closing chants – “think locally, act globally – it starts with you”.

“It’s easy to feel helpless because we can’t fix everything by ourselves – but we all have the power to influence our communities and the people around us. We need to be less harsh on ourselves – try to focus our energy on the things we can change rather than beating ourselves up for the things we can’t”, he explains.

An exclusive 34-minute 4K feature, directed by Benny P (KoRn, Lenny Kravitz, Buzzcocks), featuring candid interviews and playthrough videos of the ‘SPARKLE’ EP in its entirety. ‘SPARKLE IN MOTION’, is available now on Vimeo On Demand, at https://vimeo.com/ondemand/darkosparkleinmotion

AUX, The Ladder is available on all digital streaming platforms.
Streaming link:
https://ohf.lnk.to/infoblackout,

SPARKLE IN MOTION’, is available to rent:
https://vimeo.com/ondemand/darkosparkleinmotion

Over a raucous decade, DARKO have by definition, become veterans of the UK Punk scene and it is not uncommon to see them standing as an essential name within the intricate and complex world of contemporary Punk and Hardcore.

The band, urgent and charged with conviction, are set to continue championing and contributing to the health of the very scene that birthed them as they pen the narrative of their new chapter.

In 2020, longtime voicebox Dan Smith returned to his native Australia and parted ways with the band after so long in the vox seat. Dan’s evocative, emphatic and emotional lyricisms have left quite the legacy throughout the band’s releases. Darko’s four other noisemakers have curated a backdrop of vicious, hybridised Skate Punk and Melodic Hardcore that has been pushed beyond itself across thirty countries.

Darko have now enlisted longtime touring compadre Tom West of UK shredders, Almeida. The band have never hid from what ails them or the society they inhabit but with West at the vocal helm now and forgoing the complacent societal padding forced upon us all, his lyrical discomfort has spurred the band’s most unbarred barrage yet.

Darko’s evolution is tied to their past but with threads so long that there is an abundance of slack to play with. Notes of Polar Bear Club, Mastodon, A Wilhelm Scream, Protest The Hero, Rise Against and Propagandhi can all be savoured in their contemporary flavour profile.

Rob, Chris, Karl, Andy and now Tom have come together to the highest degree, poised and proud to show you a reimagined, powerful and determined Darko.