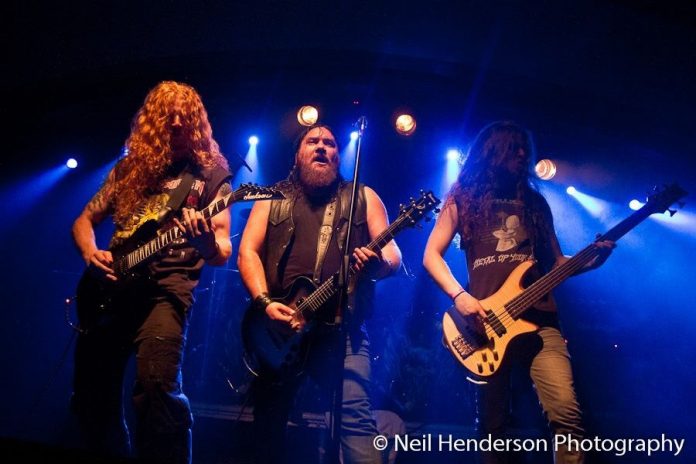 Attica Rage are set to go in the studio in the new year and will tour the new record next autumn.

MVM caught up with the sweaty band – and all round decent guys – just minutes after they left the stage in Birmingham recently and clutching a beer, the boys told us their plans.

“We’ve got some songs ready, ” singer Johnny told us. “We will be recording them early in 2015 with the aim of getting some summer festivals under our belts, before a full UK tour in the Autumn.”

Ahhh yes, the UK tour. Attica Rage tour so often in September it might as well be called “Ragember” (or something – Ed) so guys, why? “Well,” laughs drummer Richie, “it’s a good time to do it. The festivals are all over and it’s just good to get out and play.”

With their last album – the fabulous “88mph” – the band came up with a novel marketing ploy. Their single “Long Ride Home” involved a social media campaign which saw fans listen to the cd then post it a friend in another country. Reflecting on the idea, Johnny says: “it was really cool, it went all over Europe and North America, everyone bought into it.”

Asked whether they might do something similarly groundbreaking for the new album, Richie admitted they might consider it, saying: “You have to do things a little differently these days to get the band name out there.”

The band have just shared a video to YouTube which showcases the whole tour.

MVM would like to sincerely thank the whole band: Johnny, Richie, Stevie and Matthew, for their hospitality on the night, and for not punching our inebriated friend who tried to find out which why they were going to vote in the independence referendum…… – Cheers guys!