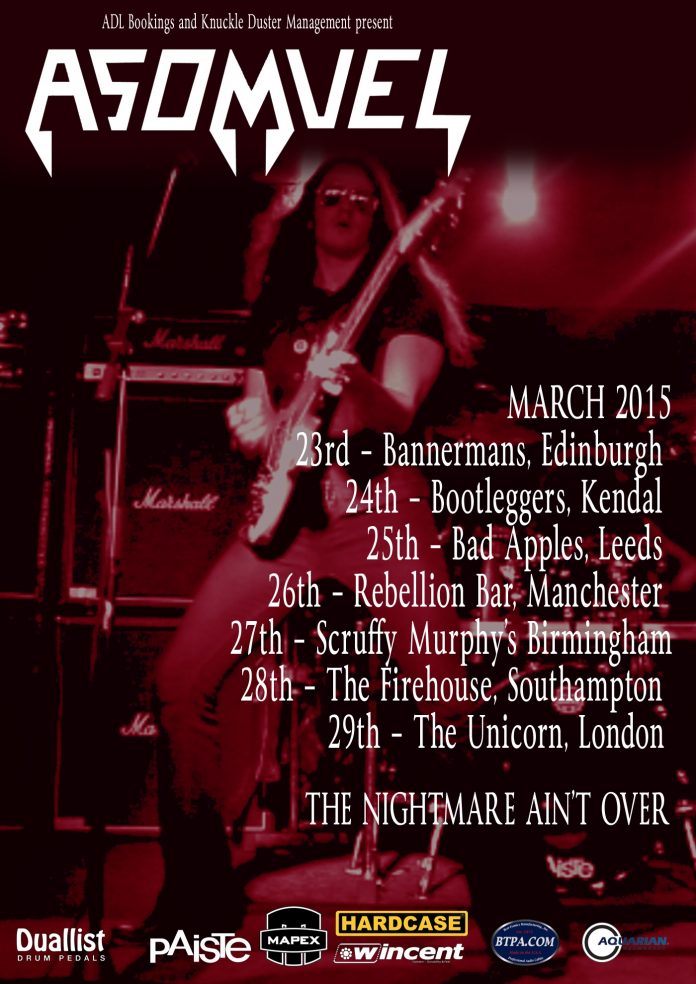 Larry Paterson in on drums for brilliant Brit crew.

British band ASOMVEL of whom we said when last we saw them live: “If Motörhead are the kings of this type of fast, dirty rock and roll then Absomvel give it’s boyfriend a kicking before taking it out the back for a quickie.” head out on a 7-date tour this March, calling at:

Ahead of the tour, ASOMVEL play a Camden Rocks showcase gig at The Barfly on Monday 9 February.
Tickets: http://po.st/CamdenRocksTix
Event: http://po.st/CRP0209

ASOMVEL have toured with Grand Magus (as they were when we saw them) and supported Carcass, Anvil, and the mighty Orange Goblin. A recent line-up change has powered the band forward, and armed with vocalist Ralph, and drummer Larry Paterson, ASOMVEL swiftly released “Railroaded,” a brand new track and video to showcase this new
line-up.

The band are currently writing their third album, which will be released on a Bad Omen Records.

Formed in 1993 by guitarist Lenny Robinson and bassist/vocalist Jay-Jay
Winter, ASOMVEL’s first drummer was ex-Cathedral/Acid Reign man Mark
Wharton, but “about ten” more came and went before the band recorded their first demo in 2001. After 2007’s Full Moon Dog 10″ the power trio managed to thrash out their raucous debut LP Kamikaze in 2009 to much acclaim, ASOMVEL firmly establishing themselves as underdog cult heroes of the UK HM underground. Barely a year later, however, the band was shaken to its core when Jay-Jay Winter was killed in a road accident.

Although a devastating tragedy, Lenny knew that the band had to continue in tribute to the determined spirit of their founding frontman: “ASOMVEL
could’ve died with him, but I was never gonna let that happen,” affirms the
axeman. ASOMVEL headlined their own inaugural Full Moon Dog Festival in
Bradford in 2011 in honour of their fallen comrade, and have shared the
stage with the likes of Carcass, Anvil, Grand Magus, and Orange Goblin.

Asked how the band has changed, Lenny is unequivocal: “The band hasn’t
changed from the day we started it,” he asserts. “It’s something me and Jay
believed in strongly; never change…ever! It’s the downfall of a lotta
bands, they think they have to grow musically for some reason, but they
just end up out-clevering themselves.”

When Will Palmer started up Bad Omen Records in 2013, his formative
ambition was to coax a new album out of ASOMVEL, sending them into the
studio with producer James ‘Atko’ Atkinson (Gentlemans Pistols) to record
their second album, Knuckle Duster. “We wrote all the stuff really quick,
off the cuff,” says Lenny. “All the songs came together very easy, we
didn’t have to force anything. I would say it took no longer than 10
minutes to get the basic songs. We didn’t try to jazz ’em up, we purposely
kept them very basic, cos we like simplicity and we like it in the groove.”
Consequently, Knuckle Duster is a focused and fat-free expression of pissed
off, Tanked-up, Venomous Motörized fury, but Atko wraps it up in a first
class ‘iron fist in a velvet glove’ production job

The band are featured on the DVD Madder Than A Full Moon Dog (a souvenir of their 2012 Full Moon Dog Festival), and have been approached to write the music for a horror film starring Dee Snider, The Calicoon, but right now writing a new album is their priority. “We got a new line-up with Ralph, who was a natural choice given that he is Jay-Jay’s nephew, and Larry
Paterson formerly with Blaze Bayley, and we’re coming out ugly”