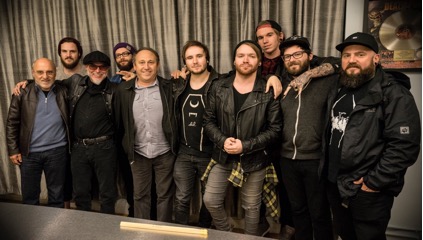 London five-piece As Lions are happy to today announce their signing to the ever-growing roster of Better Noise Records, part of Eleven Seven Music Group.

Comprised of vocalist Austin Dickinson, guitarists Conor O’Keefe and Will Homer, bassist Stefan Whiting, and drummer Dave Fee, As Lions formed in late 2014. Called the “hot new band of 2015″ by Metal Hammer, the band has been keeping busy by touring regionally and building a national following through the UK, as well as starting work on their debut album.

Of the signing, As Lions vocalist, Dickinson, says: “We’re unbelievably excited to announce our signing with Better Noise and the Eleven Seven family for our debut record! They are one of a kind, and it’s a total pleasure to work with some of the most driven and talented people in the rock world. The belief we all share in this band is already yielding unbelievable results. Here’s to a bold and beautiful 2016, we can’t wait to share the adventure. Cheers!”

Cultivating inspiration from bands that encompass a wide range of rock and metal (Muse, 30 Seconds To Mars, Bring Me The Horizon), fans can expect an all-encompassing record that will fuel headbanging and encourage crowd sing-a-longs. This was witnessed in full when As Lions performed at the legendary Wembley SSE Arena alongside Five Finger Death Punch on November 28th to celebrate their new label home and upcoming debut album.

As Lions will be releasing their Better Noise Records debut in 2016 which will be produced by David Bendeth, the multi-platinum award winning producer who has previously worked with Paramore, Papa Roach, In Flames, A Day To Remember, Bring Me The Horizon, Of Mice & Men and more.

Better Noise Records is Eleven Seven Music Group’s new avenue for exciting rock artists such as Escape The Fate and Apocalyptica, and is included in the group’s distribution deal with RED/SONY in the US, ADA in the EU, Sony in Australia, Southeast Asia and South America, as well as Universal in Canada and Japan.

Label owner and founder, Allen Kovac adds, “I’ve been looking for a project to work on with Craig and the team over at Raw Power Management as I admire the work they accomplished with Of Mice & Men and Bring Me The Horizon. Austin Dickinson and AS LIONS have given us this opportunity, blowing us away with his unique voice and dynamic live performance.”