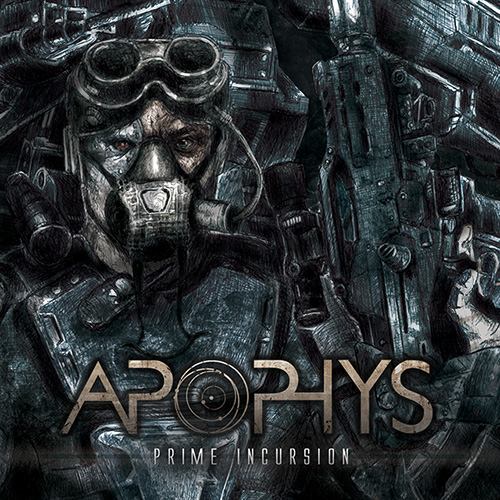 A word derived from Apophis, an asteroid that, upon initial observations, indicated a probability that it would hit Earth on April 13th, 2029 causing a collision of immeasurable proportions, Dutch death metal legion, APOPHYS – who feature within their bestial ranks members of God Dethroned, Prostitute Disfigurement, Detonation and Toxocara among others — was spawned in 2012 and have since been surgically carving their path within the annals of the modern death metal scene.

In celebration of its release,  brutality portal No Clean Singing is very pleased to offer up second cut, “Miscreants” for public broadcast. Comments the band of the latest single, “‘Miscreants’ tells a tale about experimental creation. The song develops itself around this story. First there is the experiment, lead on by a grooving start. Then there is the realization of failure; the experiment has gone horribly wrong. The last phase is the destruction of the experiment. Lead by a furious, blast beat ridden, climax to end“.

Adds No Clean Singing: “The pummeling begins immediately with a phalanx of hammering riffs that seem dedicated to pounding you into the ground like a nail driven through wood, and the start-stop jackhammering doesn’t stop. The music is a ticket straight to headbang city, but that’s not all it is.”

Get walloped by “Miscreants” at THIS LOCATION.

Prioritizing song structure above technicality, APOPHYS manifests an audio assault that’s at once vicious, guttural and meticulously-arranged yet wholly organic and infectiously memorable recalling the repugnant charm of death metal legends like Cannibal Corpse, Suffocation, Immolation and Pyrexia. APOPHYS‘ Prime Incursion will be released on April 7th, 2015 via Metal Blade Records. Preorder bundles are available today at metalblade.com/apophys where you can also sample first single, “Requiem For The Absurd.”