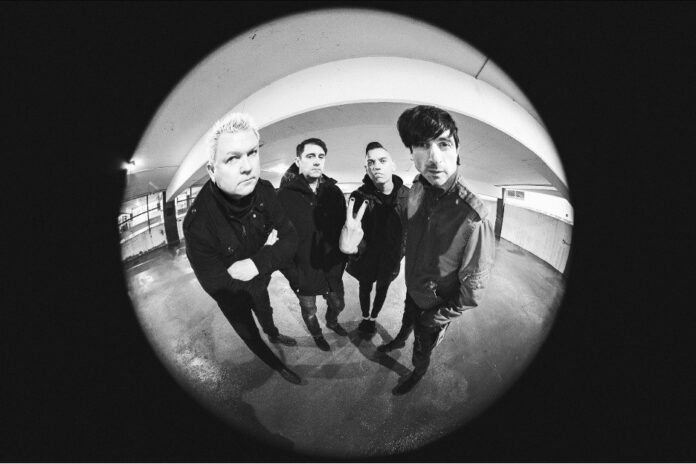 Incendiary Pittsburgh punk rockers ANTI-FLAG will release their 13th album Lies They Tell Our Children on January 6 via Spinefarm. Pre-order it HERE.

The video was lensed by INDECLINE Activist Art Collective.

The song takes a deep, hard look at climate change. Click HERE for the lyrics and the essay behind the song.

“Look, this is our 13th album,” the band declares. ”There’s no other way to put it; Lies They Tell Our Children is the best fucking version of Anti-Flag we have ever been. We haven’t been afforded the privilege and ability to spend every day together writing and focusing on every detail of an album in well over a decade and I think you can feel that collaboration and collectiveness in these songs more than any other record of ours. That collaboration was only extrapolated on with the inclusion of the eight guests who are featured on the album, spanning genres, years of friendship, and a vast array of perspectives.”

A-F continue, “The album itself is the first conceptual album the band has ever done, spawned out of a compulsive need to not just comment on the dystopian corporate wasteland we all face but to trace it back to the origin of this fate; the political policies, laws, cultural shifts, and lineage of injustice that have led us to the world we live in today.”

The band finishes, “Like the band itself, of course the album is an anti-war statement both in the literal and figurative sense. This is an important moment in history and demands an urgent response, but we thought it was also important that we retrace our footsteps to the beginning of these issues. In order to better understand how to eradicate climate devastation, imperialism, war based economics, systems predicated upon racism, and the increasing belief that these things do not even exist, you have got to take people to the source. This idea is the crux of The Lies They Tell Our Children; put this wretched history in their face and demand their empathy.”

Lies They Tell Our Children was recorded, produced and mixed by Jon Lundin

“THE FIGHT OF OUR LIVES” (Feat. Tim McIlrath of Rise Against + Brian Baker of Bad Religion)

“ONLY IN MY HEAD”

Anti-Flag are also returning to the road this fall. The band will embark on a headline run of the U.S. before heading to Canada.

Anti-Flag’s tour will kick off on September 16 in Burlington, Vermont and run through November 6 with an appearance at Punk Rock in the Park in Silverado, California. The band will also head to Quebec for a trek with Vulgaires Machins and Mudie in November.

The band has also announced ANTIfest dates in multiple cities in the U.S. and will be appearing at other major festivals through the fall.