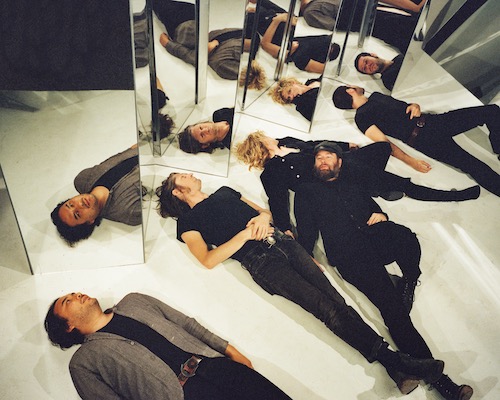 The most impactful music reflects a wide-screen view of the world back at us, helping distill the universal into something far more relatable. Since forming in 2004, the Black Angels have become standard-bearers for modern psych-rock that does exactly that, which is one of many reasons why the group’s new album feels so aptly named. Today, Austin’s legendary rockers have announced their brand new album ‘Wilderness of Mirrors’outSeptember 16 on Partisan Records.

It has been 5 years since fans have been treated to an album from the Black Angels and ‘Wilderness of Mirrors,’ marks a triumphant return with their foot on the pedal. Political tumult, the pandemic and the ongoing devastation of the environment have provided ample fodder for their signature sound and fierce lyrical commentary. Narrated by Mother Earth, lead single “El Jardín” is a rib-rattling plea of protection to humans. The new song arrives alongside an official video directed by Vanessa Pia, featuring Austin Amelio (The Walking Dead) and starring his son Lev.

Director Vanessa Pia shares,
“Alex came to me with a dystopian sci-fi idea of a future where Mother Nature is dead because we killed her, and the only way to experience her is through virtual reality- an already relatable feeling, as most of the world lives viscerally through social media. Who knows where we will be 100 years from now. This project has been a dream in the making and a massive labor of love and could have only been possible with such a dedicated and talented crew, especially my dear friend and cinematographer Andy Hoffman. For me as a director, it’s an honor to deliver this project on 35mm print and to have been chosen to make something for my favorite band.”

Since forming in 2004 in Austin, TX, the Black Angels remain masterfully true to psych-rock forebears such as Syd Barrett, Roky Erickson, Arthur Lee and the members of the Velvet Underground, all of whom are namechecked on “The River.” The band’s global influence is solidified by their beloved, long-running Levitation Festival, the veritable ground zero for the genre’s past, present and future — celebrating its 15th anniversary this year. Following the acclaimed Death Song LP (2017), ‘Wilderness of Mirrors’is their latest full-length release on Partisan Records.

“EL JARDIN” IS OUT NOW. WATCH / SHARE THE VIDEO HERE
‘WILDERNESS OF MIRRORS’ DOUBLE LP OUT SEPTEMBER 16 VIA PARTISAN RECORDS