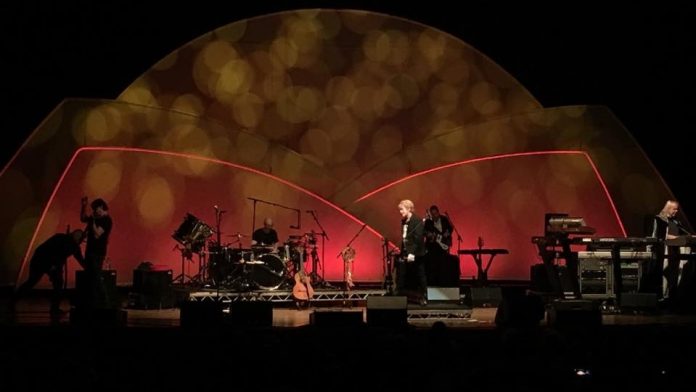 Glorious venues such as the Birmingham Symphony Hall were just made to host incredible music events……and that is just what we got with the arrival of Messrs Anderson, Rabin & Wakeman for an evening of sheer unadulterated Prog bliss.
ARW as they will be none for the rest of this review billed this tour as ‘An evening of Yes music & more’……its been 25 years since these guys last played together and I must say it was well worth the wait…..but I have to say that I was a little worried at first when the magnificent ‘Perpetual Change’ had what can only be described as ‘muddy sound quality’……but with a few words of advice from Trevor Rabin this issue was quickly put to bed.
The setlist the guys had assembled is just like one of those cassette compilations we’ve all put together over the years……I like a look at the setlist beforehand (I know many who don’t….and that is their choice) and when I saw what was in store I must say It raised a rather big smile for what lay ahead…..three out of my four fave Yes tracks ‘Heart Of The Sunrise’, ‘Changes’ & ‘Roundabout’ we’re all there along with gems like ‘And You & I’, ‘Hold On’ & ‘I’ve Seen All Good People’…..there really was something for everyone.
ARW were always going to have quality musicians around them…..Lee Pomeroy these days is a gimme (Steve Hackett once told me that he calls him The Oracle as he just knows how to play anything & everything) such is his level of brilliance that this guy just effortlessly masters anything he attempts but the real £250 HMV Giftcard in the envelope from your slightly batty aunt was percussionist Louis Molino III…..what an amazing player this guy is and a real character to boot…..I found it difficult to take my eyes off him…..this was the real music version of the 1992 US Basketball ‘Dream Team’
There were so many wonderful moments during this epic performance that simply trying to put it into words in a review cannot do it justice…..I mean how do you adequately describe a silver cloaked keyboard legend & a film score genius guitar player going for an impromptu walkabout through the downstairs section of the Birmingham Symphony Hall?
All in all this was one of those nights that if you saw it on DVD (or Blu Ray such is the choice these days) a few months later you would kick yourself for not getting a ticket…..it was a magical journey throughout the fantastic Yes back catalogue and to see such legends share a stage can only be described as ‘Phenomonal’……these are the kind of evenings that don’t come around too often…..you just have to make sure you’re there when they do, after all there is nothing more annoying than seeing everyone’s pictures or reading reviews the following day knowing that you could have been in that room……just saying!!!!
Garry Foster
Unchained: Tuesday’s 10pm-Midnight
Prog Rock Files: Thursday’s 10pm-Midnight
101.8WCR FM and online at 101.8 WCR FM – The Station with MORE for Wolverhampton