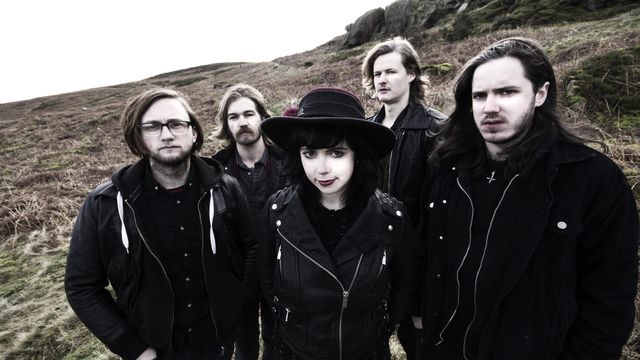 Yesterday we brought news of a new Amplifier tour. Today the support band is named

Black Moth rose from the Leeds underground scene, taking their trash culture fixations and their love for Stooges squalor and Sabbath sulphur to create an onslaught of monumental riff sorcery and serpentine grace.
With Harriet Bevan’s biting and beguiling voice leading the charge, the Moths effortlessly transcend their influences to arrive at a nefarious and turbulent brew. Equal parts horror movie atmosphere, thunderous drive, big riffs and maverick spark.
Having played Leeds, Reading and Download, as well as touring the UK and Europe, the band have been stamping their live authority on support slots with Uncle Acid and the Deadbeats, Red Fang, Turbowolf  as well as a headline European tour at the end of 2014. 2015 looms large.
With the recent arrival of their critically acclaimed second album, “Condemned to Hope,” produced like their first by Jim Sclavunos (Nick Cave & the Bad Seeds, Grinderman, The Cramps), the band are set to step it up a gear, beginning with a series of dates with the frankly awesome AMPLIFIER.
The band say: “Salivating at the prospect of hitting the road again in April and playing some of those awesome venues with our riff brothers from across the Pennines- AMPLIFIER!!”
UK TOUR w/ AMPLIFIER