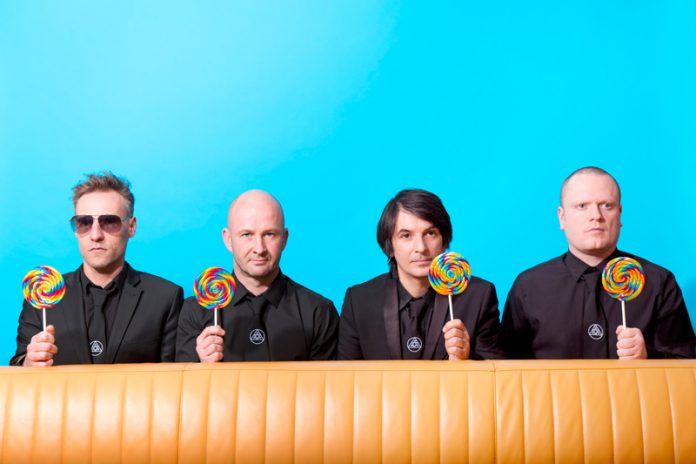 Amplifier return with their sixth and most definitive album to date, ‘Trippin’ With Dr Faustus’, due for release via Rockosmos this June 30th.

First track ‘Kosmos’ instantly delivers Amplifier’s calling cards of massive riffs with lyrical sentiments that reach far beyond space, time and the limitations of ones, zeros and polycarbonate manufacturing. The story of Faust is more relevant than ever in the 21st century.

In stark contrast to the compact kidney punch that was 2014’s ‘Mystoria’ – ‘Trippin’ With Dr Faustus’, like all epic journeys, is in no rush to let the plot unfold and spill out its secrets. “Each child is a child of circumstance” summarises frontman Sel Balamir.

The genesis of the idea of TWDF lies neatly in the heart of the song ‘Silvio’ – originally written in the period around 2011’s ‘The Octopus’. ‘Silvio’ didn’t make it onto that behemoth double album, “it didn’t really fit in with the Album’s universal themes.” But the ideas lurking in ‘Silvio’ persisted and soon made their own bed. “Who doesn’t want to make a record about our relationship with The Devil? The ultimate baddy…” ‘Silvio’ was very specifically the story of Faust, albeit renamed in reference to Italian Faustian politico Berlusconi, and thus became the template for the rest of the album.

Recorded between 2014 and 2016 at Amplifier’s studio in Manchester, TWDF was produced by Balamir, who also designed the now traditional Amplifier packaging and artwork. A decidedly European affair, the album was mixed by Spanish engineer/producer Iago Lorenzo in Vigo, Spain, and mastered by Robin Schmidt at 24:96 in Karlsruhe Germany.

Much of the sound of TWDF is owed to the chance acquisition and the ensuing slow, tedious and loving rebuild of an old 2″ Otari Tape Machine, which had been left to the band in a bequeathment  following the untimely death of an old and much missed colleague. This retro piece of gear lead to a new and more intricate studio-based focus on the record – compared to the previous approach to ‘Mystoria’, rehearsing the record for several months and then recording the whole thing live in a few days. TWDF evolved slowly but gradually over 18 months as the tape machine repeatedly died and was each time reanimated with components scavenged from the internet from other old and dead machines scattered around the globe.

Meanwhile, following the release of 2014’s ‘Mystoria’ on the Thomas Weber’s Superball label, a relationship that the band had been very happy with, Sony Music acquired Superball’s parent company Century Media, moving the ownership of the label from independent hands to corporate control. This was a position that Amplifier were not comfortable with.

In 2004 exactly the same thing had happened around the release of their debut self-titled album. In this incident BMG raided MFN parent company Zomba to dissolve the label – in turn being cannibalised by Sony a few months later.

“It always ends up with the little guys getting lost down the cracks…that’s why we decided to bail while we could – for better or worse”, Sel adds.

Following the sad but amicable parting from Superball, the band were left in dire financial straits following the sudden removal of future advances – but were none the less  buoyant about the prospects for the next record. Balamir decided that following the experience of self-releasing ‘The Octopus’ in 2011 and its relative success, receiving Impala Silver Status, that it would make sense to gather some investors and found his own Artist-focused label, Rockosmos, to release TWDF. Promptly he also signed Sheffield space rock titans Awooga and London art rockers Thumpermonkey to be the core of his new eclectic rock stables.

Exploring the Faustian coincidences of power, success, fame and money, TWDF blurs fact with fiction, reality with fantasy. It’s a diverse sonic landscape where human civilisation begins to take on the appearance of a synthesis between David LaChapelle and Hieronymus Bosch. Greed, Ego, Dominance, Fear and Seduction suddenly becoming the defining trends of the 21st Century. Enjoy the trip.

‘Trippin’ With Dr Faustus’ is released via Rockosmos on June 30th 2017 via all digital distributors and will also be available on double 180g gatefold transparent vinyl, a collectors edition mediabook CD and in standard Jewelcase CD.