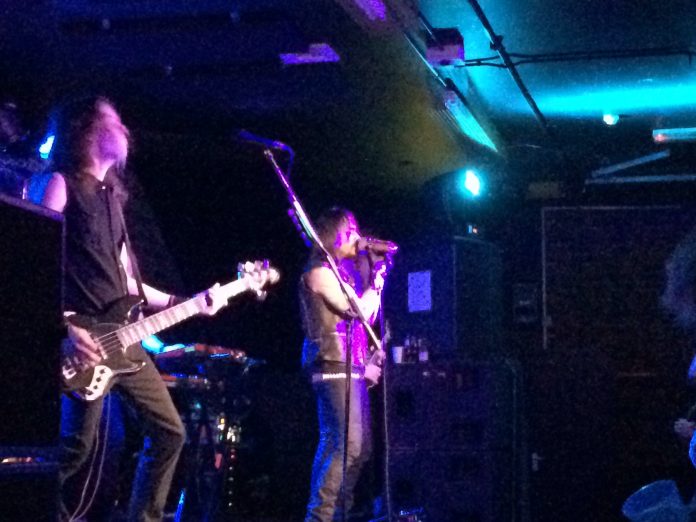 Holland’s Textures bring with them the kind of groove that could move mountains and crush puny humans in its bare hands. And yet in amongst that there’s a keen eye for melody and a genuine singalong chorus here and there. It wouldn’t be too far of the mark to suggest for example, that there’s a touch of Faith No More about songs like “Illuminate The Trail”. even Mike Patton and his boys, though, never had anything quite as heavy as “Awake” – which according to singer Daniël de Jongh sees them “speed things up a notch”. The Dutchmen have just released a new album, and happily “Phenotype” is more of the excellent same, and with most of the 50 minutes they spend on stage being taken from it, the band clearly have confidence in it too. “Shaping A Single Grain Of Sand” crushes on the back of a trademark complicated rhythm, but it’s closing tune, “Laments Of An Icarus”, from an earlier album, that really brings home just how versatile this band with its almost extreme metal overtones.Textures tonight looked a band that is growing on their own terms, but more impressively one at the top of their game.

“Now for some old stuff…..” Says Amorphis singer Tomi Joutsen, before quick as a flash he deadpans: “see we’ve made one guy happy….”

The song they play after that “On Rich And Poor” is one of a pair of old ones they play right in the middle of their set, the second is met with the thought from Joutsen that “it’s a kick ass tune if you ask me” he’s a good judge. And also this surely proves there’s a lot more smiles than you might expect given the Amorphis’ sound.

The key question of just what that sound is rears its head while they are onstage. More carefree here perhaps than on record, there’s a driving, pounding quality to “Sacrifice” for example, but then “Bad Blood” brings an epic, almost power metal side into play. Then, just when you think you’ve got them pegged along comes an almighty, guttural roar to usher in “The Four Wise Ones”.

The six piece get called “prog metal”, largely it seems, because they don’t fit any neat pigeonholes, but throughout a 90 minute set of genuine thrills and spills they are nothing more than a confident, classy and modern heavy metal band. Technically proficient, yes most definitely, but if you want to enjoy them on a purely visceral level – that is to say you want to bang your head and not stroke your chin and talk about chord changes, then there’s plenty here in the riff-filled “Silent Waters” to satisfy all your needs. Then just sometimes they do the whole thing in one, “Hopeless Beings” manages to have the melody of HIM (largely through the expert keyboards of Santeri Kallio) wrapped up in a barbed wire glove.

Although the set rightly spends a lot of time on last year’s “Under The Red Cloud” record, it ends with “House Of Sleep” before they race through an excitable encore, eventually wrapping things up with “The Smoke” which is turned into a fist-pumping anthem.

It seems strange that a band with such a lengthy, complicated past has never played Wolverhampton before but tonight is their first time, and Joutsen, together with his incredible microphone, including about seven different handles, In particular, seems dead set on enjoying the affair. And after more than 25 years, if this heralds the start of a real golden period for Amorphis, then that can only be a very good thing indeed. On this evidence they deserve it too.