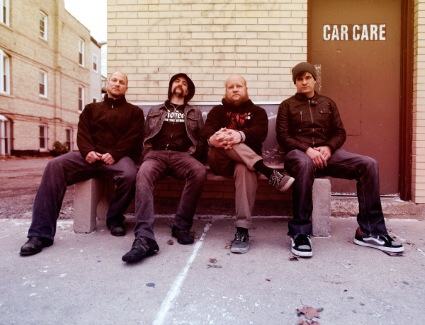 Perhaps the final release from US hardcore boys, but they are said to be leaving on a high

“Prolapse” follows American Heritage’s incredible 2011 album, “Sedentary” and may well be their final release given that vocalist/guitarist Adam Norden left the Chicago-based outfit following the recordings of this new effort.
To say they will be greatly missed, would be an understatement specially knowing they’re about to release their most impressive work to date.

Tearing through 9 tracks in 33 minutes (3 of them cover songs of Black Flag, Descendents and Girls Against Boys’ originals), “Prolapse” is frantic and vicious, a boisterous collision of mathcore, sludge and noise rock elements.
The recordings were once again supervised by Sanford Parker, who does a remarkable work here, preserving the roughness and granularity of each instrument sounding as if the band is playing right in your living room.

“Prolapse” is a prime example of excellent and intelligent musical execution and will unquestionably stand as American Heritage’s masterpiece, so it’s a shame that we watch them disband at the peak of their collective talents.