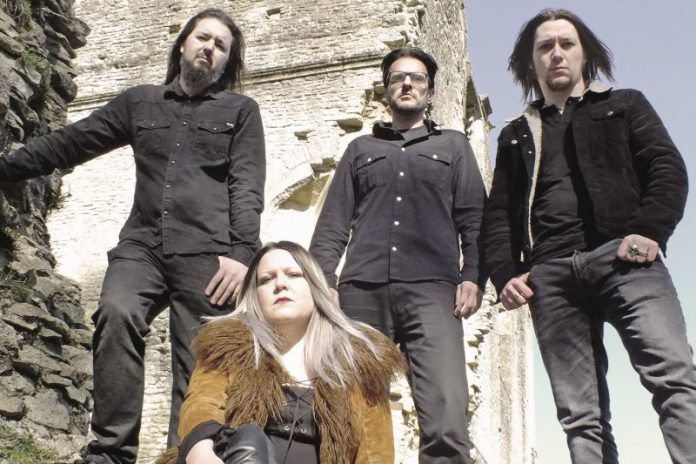 Hailing from the English Midlands, its finest stoner doom outfit ALUNAH are finally back in the studio and have now unveiled first and exciting details about a brand new album, which is set to see the light of day in early 2017 on Finland’s cult label Svart Records!
The charismatic band with their nature inspired, psychedelic and doomish spirit are currently working in the Skyhammer Studios with CONAN’s Chris Fielding, to record their 4th studio album. But while they do, ALUNAH have now unleashed first and hotly anticipated details from their upcoming record titled ‘SOLENNIAL’!

“Adrian Baxter is an artist that has been on our radar for a year or so, his work struck a chord with us as soon as we saw it and we just had to work with him. He took my lyrics and created a masterpiece which encompasses every theme and subject matter from “Solennial”, it was completed quite a while ago so we’re happy it is finally seeing the light of day. This week we will be heading up North to Skyhammer Studio to record the album with Chris Fielding; we always aim to try different things with our music but we’re stepping way outside of our comfort zone this time, in more ways than one. We are very proud of the songs and can’t wait for them to be released.”  Vocalist & guitarist of Alunah, Sophie Day, comments.
The tracklist of Solennial will read as follows:
1. The Dying Soil
2. Light of Winter
3. Feast of Torches
4. The Reckoning of Time
5. Fire of Thornborough Henge
6. Petrichor
7. Lugh’s Assembly
8. A Forest
For 10 years, since first coming together back in 2006, Alunah have trafficked in a blend of the earthly and the unearthly. Over the course of their three albums – 2010’s Call of Avernus, 2012’s White Hoarhound and 2014’s Awakening the Forest – the four-piece have been a constant force of progression into an individualised take on psychedelic and organic heft. Their material has never lacked structure or groove, but with the melodic vocals of guitarist Sophie Day ever at the fore, they keep an eye toward the ethereal as well.
As they always do, Alunah are moving forward. Sophie, guitarist David Day, bassist Daniel Burchmore and drummer Jake Mason have just recently signed to Svart Records for the early 2017 release of their fourth album Solennial, which they are currently recording with Chris Fielding (Conan) at Skyhammer Studio, also owned by Conan’s Jon Davis. Following in the footsteps of Svart alums Hexvessel, or Jess and the Ancient Ones, Alunah arrive at Svart Records preceded by a reputation for blending nature worship and heavy vibes with a grace that few can match, basking in a sun-soaked spirit of beauty and decay, folklore and deeply personal expression.
Look for them to expand their sonic palette with their upcoming album Solennial, set to be released in early 2017 on Svart Records, and see them build on what they’ve accomplished before in their rich, engaging sound that seems to be always wandering and never, ever lost.
To shorten your wait on Alunah’s brand new album, catch the band live on the following dates:
20.10.2016 UK – London, Devonshire Arms
21.10.2016 NL – Tilburg, Little Devil
22.10.2016 NL – Into the Void Festival, Leeuwarden
28.10.2016 UK – The Coal Vaults, Coventry
For More Info Visit:
www.facebook.com/alunah.doom
www.alunah.co.uk
www.svartrecords.com