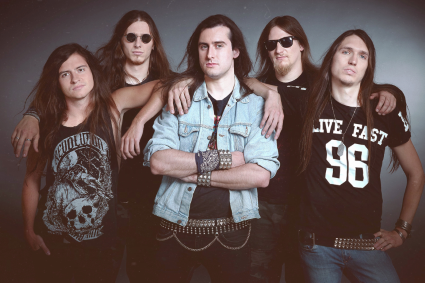 Young German Melodic Metal act Alpha Tiger have signed to Steamhammer / SPV to release their third, studio album, ‘iDENTITY’, on January 19th 2015. iDENTITY will be available as a Digipak CD, including DVD featuring recordings from Alpha Tiger’s performance at the Bang Your Head festival in June 2013, as a jewel case and as a double gatefold vinyl LP.

‘iDENTITY’, lives up to all expectations of ‘classic third album’ syndrome, also establishes Alpha Tiger’s musical identity. While the band’s second album ‘Beneath The Surface’ still featured the influences of acts such as Queensryche, Fates Warning and Riot, the quintet now sounds unmistakably like Alpha Tiger.

Guitarist and main songwriter Peter Langforth explains; “When we released our debut album ‘Man Or Machine’ in 2011, it was greeted by rave reviews because lots of fans felt reminded of the golden age of heavy metal. Although this was an ideal start for us, it was nothing we wanted to limit ourselves to. Instead of remaining in the comfort zone of our newly-acquired fan base, our second release ‘Beneath The Surface’ already saw us develop more individualistic and topical traits without straying too far from our basic style. We’ve completed this process on ‘iDENTITY’; now we sound the way we always felt Alpha Tiger should.”

‘iDENTITY’, which was produced by the band themselves, was recorded by engineers Mirco ‘Godi’ Hildmann (Guano Apes, among others) and Dominik Glöckner at Berlin’s Music Flash Studio, before being mixed and mastered by Tommy Newton (UFO, Victory, Gamma Ray) at the Area 51 Studio in Celle.

A review will appear here in the next couple of weeks