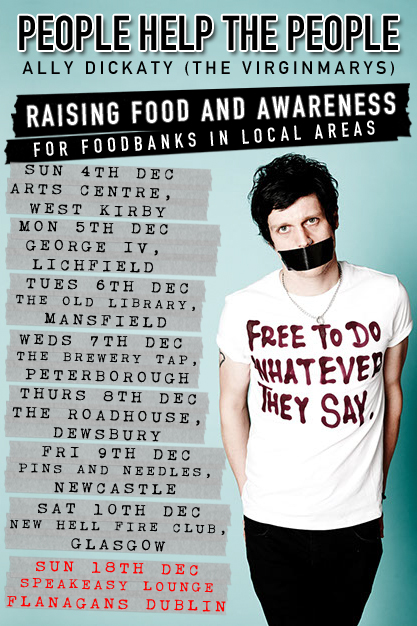 Following the success of his ‘People Help The People’ DIY charity show, in support of the Macclesfield foodbank ‘Silklife’ last September, Ally Dickaty, vocalist / guitarist with The Virginmarys, is playing a run of solo acoustic gigs in support of various foodbanks and homeless charities all over the UK…

Last month, Ally released a series of videos on The Virginmarys facebook, asking fans if they would like to host an event to support foodbank and homeless charities in their local community; Allyoffered to travel and play these events for free, all with the intention of raising much needed funds and food.

These video announcements swiftly resulted in a 7-date UK tour, plus an extra date in Ireland too. The response and support from fans has been unprecedented! Folk have actively promoted and hosted all shows, as well as provided Ally with a couch to crash on across all dates.

“I was amazed by the response of the event I put on in our hometown in September and decided to put it to our fans to help organise a UK tour, getting people actively involved. It’s a situation that’s continually getting worse and showing no signs of improvement, homelessness in Manchester has increased by 80% in the last 6 years. I want to feel like I’m actively doing something and not just talking about how bad things are getting. I wanted to do something great this Christmas.”

Obtain your ticket for any of the remaining dates by offering a bag of shopping or a donation. More details can be found on the The Virginmarys facebook page: www.facebook.com/TheVirginmarysOfficial

In addition to this, The Virginmarys will perform with New Model Army at The Forum, London, on December 15th.

Hailing from Macclesfield, England, The Virginmarys make anthems that scream with all the potent sound and fury of modern punk acts, brimming with the honesty of prime British rock of the early 1970s, before the wizards and capes overcame the attack and dynamic.

The trio recently released their ‘Divides’ album via Spinefarm Records. A kicking and screaming collection of songs, all unapologetically honest, ‘Divides’ is a confrontational reflection of life today in modern Britain; a call to arms, asking for anyone who has ever felt disillusioned to “stand up and unite in love – not to divide in fear”.