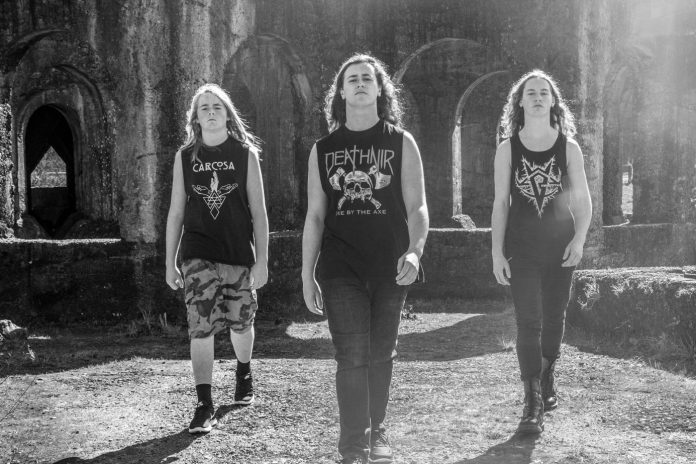 Three teenagers, known as ALIEN WEAPONRY, from a tiny town in the small South Pacific nation of New Zealand have managed to capture the imaginations of people all over the world with their unique thrash metal sound and commanding live performances.

This in itself is surprising, but perhaps the most unexpected element of all in their success is that many of the band’s songs are delivered in a language that is unknown to international audiences – New Zealand’s native language, Te Reo Māori.

Now, ALIEN WEAPONRY are ready to release their furious debut album “Tū” on the world. Short for “Tūmatauenga”, the Māori god of war, “Tū” also means to stand strong and proud, and to stand for something. The notion is reflected in the album artwork, which includes the traditional moko kanohi (facial tattoos) of the Māori warrior.
Standing for something important is something the band does equally well in English or in Māori. Today, Napalm Records releases the single and video for the song “Holding My Breath” – the first single so far to be sung entirely in English.
The song was written by Lewis (Vocals/Guitar). In it, he talks about the anxiety of being judged and socially ostracized by peers to the point of being unable to function.
“It’s about something that actually happened to me. I felt so bad that I literally stayed in my room and couldn’t bring myself to leave the house or talk to anyone,” he says. “I wrote the song at that time, and it was one of the things that helped me work through it, so I hope it will resonate with other people going through similar things.”
One of the people it has already resonated with is actress Rose van Wylich, featured in the video; who experienced similar feelings of isolation as a teenager.
“Holding My Breath” is the first single put out by Napalm Records in advance of ALIEN WEAPONRY’s debut album “Tū” being released on June 1st. A month later, the band will head to Europe for a 3-month tour which includes the world’s biggest metal festival, Wacken Open Air.
Available in the following formats:
1 CD Digipack & 2 Bonus Tracks
LP Gatefold & 7″ Single (2 Bonus Tracks)
Digital Album
Tracklisting:
1. Whaikorero
2. Rū Ana Te Whenua
3. Holding My Breath
4. Raupatu
5. Kai Tangata
6. Rage – It Takes Over Again
7. The Things That You Know (Bonus Track)
8. Whispers
9. PC Bro
10. Urutaa
11 Nobody Here
12 Te Ara
13 Hypocrite (Bonus Track)
Lineup:
Vocals, Guitars: Lewis de Jong
Drums: Henry de Jong
Bass: Ethan Trembath
Touring:
03.02.18 NZ – Hamilton / Rugby Sevens World Cup
06.02.18 NZ – Wellington / Waitangi Day Festival
17.02.18 NZ – Wellington / Pao Pao Pao
03.03.18 NZ – Auckland / Auckland City Limits Festival
20.03.18 NZ – Auckland / Prophets of Rage support
22. – 28.07.18 SL – Tomlin / Metal Days Festival
02. – 04.08.18 DE – Wacken / Wacken Festival
01.09.18 DE – Hamburg / Welt-Turbojugend Tage
More Dates Coming Soon!
For More Info Visit:
WWW.ALIENWEAPONRY.COM
WWW.FACEBOOK.COM/ALIENWEAPONRY
WWW.NAPALMRECORDS.COM
WWW.FACEBOOK.COM/NAPALMRECORDS