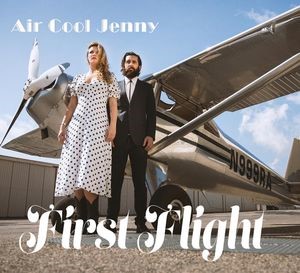 Air Cool Jenny is a duo formed over two years ago by Helen Rose and Kramer Sanguinetti, both multi-instrumentalists and singer-songwriters. They met in New York City, fell in love, moved to Sanguinetti’s hometown of New Orleans for a few years and most recently, settled outside of Los Angeles, CA, where Rose was raised. `First Flight` is their debut release where Kramer supplied vocals, guitar, pedal steel and piano while Helen sang vocals and played tenor sax. The pair were joined by Bryan Webber (bass), Kirkland Middleton (drums) and Brendan Moore (organ).

This extended play opens with `Pelican` which was inspired by a special spot the couple used to frequent along the Holy Cross levee on the Mississippi River. It opens quietly with some gentle picked guitar and delightfully harmonic vocals before we have a swirling organ, electric guitar and drums filling it out. A quite reflective reminiscence on a point in time and maybe it`s significance in life. We have a more mesmerising quite dreamy number with `When I Rise` which is obviously a love song and reflects the feeling you get when you realise you`ve met “The One”. The pedal steel. softly shared drums and saxophone tinges add a certain something to this captivating track.

`Pissin` On The Moon` is more of a throwaway composition. A fast paced piece that almost veered into the genre of Cajun music. This four track offering closes out with `When The River`s Gone` which the couple have related is about their shared experience of going through some of the worst storm years the south has seen ever, while at the same time falling in love with New Orleans and growing roots within the community. A dreamy saxophone, piano keys and brushed drums lead us into this introspective thoughtful reflection. It`s rhythmic harmonies, musical and vocal became almost hypnotically enchanting.

There was much to enjoy on `First Flight` and it certainly is a showcase for the talents of Helen Rose and Kramer Sanguinetti. This extended play was a charming introduction to this duo, and I look forward to what`s to come in the future.