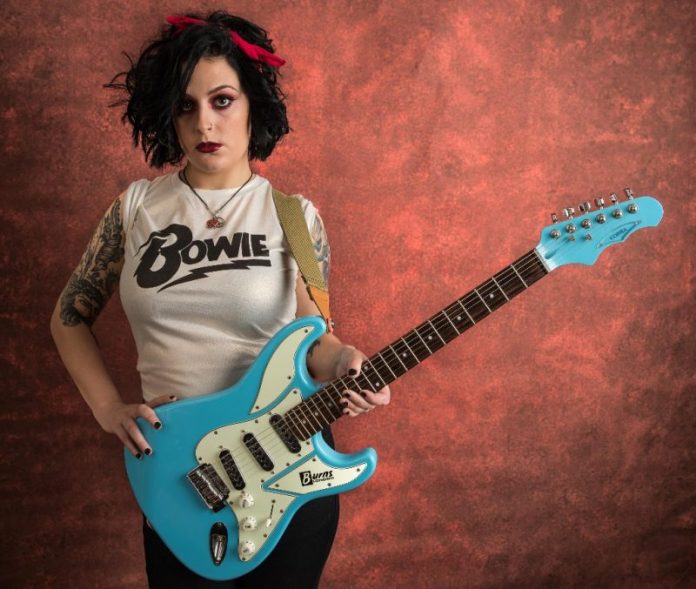 British firebrand singer-songwriter Louise Distras will release her brand new single “Aileen” on the 30th of September 2016. The song will be Distras’ first new music since the release of her critically acclaimed 2013 debut album “Dreams from the Factory Floor”.

Produced  by “Dreams from the Factory Floor” producer Steve Whale (The Business) and mixed by Ross Petersen (Bruce Springsteen, The Vamps,John Mayer), “Aileen” represents real musical growth and a sonic shift for Louise, being an impassioned radio anthem that steps away from the punk and protest tags of her past and into powerpop territory. Nevertheless, the pop-friendly hooks house an intense emotional core.

Lyrically “Aileen” is a hard-hitting dancefloor track that explores the dark story of ‘America’s first female serial killer’ Aileen Wuornos. It’s a song that sees Distras questioning rape culture and the sanctity of life. Having already been championed by Kerrang Radio, Radio X and Radio 1, ‘Aileen’ is living proof – if ever it was needed – that pop music does not have to mean ‘dumbed-down’ or ‘throwaway.’

Says Distras of “Aileen”: “One night after a show I watched the Nick Broomfield documentary ‘Selling of a Serial Killer’, which is about ‘America’s first female serial killer’, Aileen Wuornos. As someone who has experienced homelessness and sexual assault, Aileen’s story hit me pretty hard but left me feeling inspired to share it through my music. The film also left me with my own questions about rape culture and the idea of nature VS nurture, so I decided to make my own DIY film that explores the lyrical content of the single. It’s called ‘Real Outlaw – A Commentary on Rape Culture and the Riot Grrrl Movement’ and it’s available via scanning a QR code that’s printed on the back of the CD and also on tour posters across the UK.”

“Aileen” and it’s accompanying film will be released worldwide on 30th September 2016 digitally via iTunes and Amazon, or CD via Louise’s official website. Pre-order your copy now at: www.louisedistras.co.uk/store

The past three years have seen Louise Distras touring across the UK, Europe, Canada and the USA with the likes of Mick Jones (The Clash), Billy Bragg,Buzzcocks, Stiff Little Fingers, The Damned and The Red Paintings, taking in appearances at such globally renowned festivals as Glastonbury, Camden Rocks, Bearded Theory, and most recently the main stages at the UK’s Rebellion Festival and Punk Rock Bowling in Las Vegas. Garnering comparisons to charged songstresses Brody Dalle and Courtney Love, Distras has been praised by The Guardian, The Independent, Big Cheese, BBC Radio 1, XFM and KROQ who have all pinpointed her as “one of the most exciting and original singer-songwriters in the UK!”

Louise and her band will be touring the UK and EU throughout 2016. Don’t miss your chance to hear “Aileen” live on the following dates: