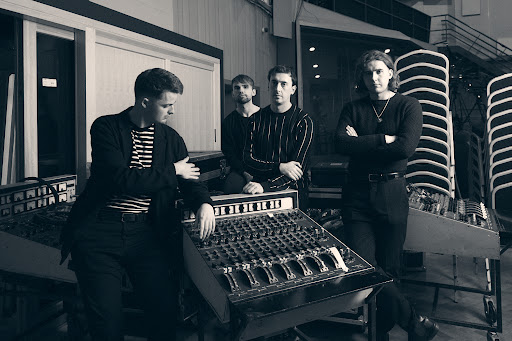 Galway four-piece – THE CLOCKWORKS – return with their rousing new single: “Advertise Me”.

Arriving ahead of an extensive run of UK + European shows throughout the Autumn, the track is also the first new music from the band since the release of their essential debut EP ‘Endgame’ earlier this year. The full list of their upcoming dates can be found below.

“Advertise Me” is a scintillating, scathing new track that sees The Clockworks confront the hypocrisy of a sanctimonious society that moans more than it does take action. Recorded at Abbey Road Studios and produced by the band in collaboration with Michael Rendall (The Jesus and Mary Chain, Shed Seven, Black Grape), The Clockworks explain of the caustic new cut:

“The idea for this song started with the line: ‘complain about consumers from the comfort of my Mac’. It got me thinking about contemporary culture and that feeling of dissonance that comes from criticising society while continuing to conform to it. The song is partly a satire in answer to this feeling.”

Simmering with spiky rock energy and once more boasting The Clockworks’ knack for scorching lyrics that hold a mirror up to society, the track plucks influence from a range of decades and genres. The band add:

“Todd Rundgren was a musical and production influence for this one. David Bowie. The Last Shadow Puppets. Red Hot Chilli Peppers. Interpol. The Cure. Pixies are usually brought up at some point in writing a new song.”

An infectious indie-rock anthem of the kind The Clockworks have made their own, but with an incisive and ominous underbelly that stands it apart from anything they have done before; “Advertise Me” is a fine addition to the band’s impressive repertoire to date and one finds them pushing themselves in intrepid new directions.

Formed in Galway and now living in London, The Clockworks are James McGregor (Vocals/Guitar), Sean Connelly (Guitar), Damian Greaney (Drums) and Tom Freeman (bass). Making a unanimous decision to find their break in the UK capital, it proved a good one. Relocating in 2019, the quartet were signed by Creation records founder Alan McGee almost overnight.

Described by NME as “sh**-hot” and praised by CLASH for their “ferocious sense of purpose, with the careering post-punk guitar lines”, the band have rapidly gained ground ever since with a string of impeccable singles including “Feels So Real“, “Enough Is Never Enough“, “Can I Speak To A Manager?” and more. Also hotly tipped by titles including The Guardian, The Independent, and Hot Press, the band have received frequent support from national radio stalwarts including BBC Radio 1’s Annie Mac on her “New Names” showcase, BBC 6 Music’s Steve Lamacq on his ‘Recommends’ show, received day-time radio play on RTÉ 2FM, and impressed the legendary Rodney Bingenheimer on Sirius XM.

Delivering exhilarating live slots across Europe, The Clockworks have played at major festivals including Pukkelpop, Eurosonic, Electric Picnic, and The Great Escape. The band have also played a huge support slot at Liverpool’s Sefton Park with Kings of Leon, appeared on Sky 1’s Soccer AM and completed a run of US dates with Pixies and UK support shows with The Reytons and Inhaler earlier this year.

Releasing their long-awaited debut EP ‘Endgame‘ earlier this year, the band are now set to hit the road with their new material imminently.. The Clockworks will be touring across the continent with extensive dates throughout this Autumn/Winter, with a string of UK and Ireland dates due to kick off in Brighton on 29 September. Full dates and details below.