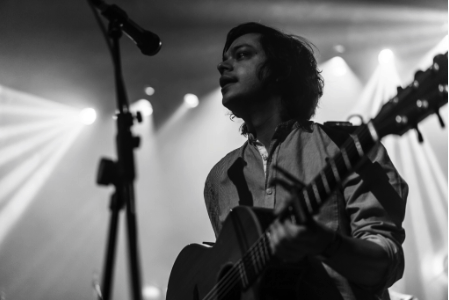 Set for release on 28th September 2019 via the Xtra Mile Recordings label, the expanded digital-only release will feature unheard new material in the form of new tracks ‘Try’ and ‘Quite Right’, plus exclusive “Yung Adult” remixes of the ‘Young Adult’ album’s most standout moments, as re-worked by the fair hand of Sam Duckworth himself.

In addition, the companion disc will collect a smattering of live highlights from some of Get Cape’s most memorable shows this year, with tracks cherry-picked from his appearances at Frank Turner’s Lost Evenings III, plus his emotional hometown appearance at Southend’s SS2 venue.

“It’s been over a year since young adult was recorded and a good year it has been. The band has grown in size and in spirit, there have been mixtapes, new songs and some really fun shows. I wanted to convey some of the joy and energy of the live shows from 2018 and what better way than to release some of the live shows we recorded. The Reading/Leeds “Yung Adult” mixtape was fun to make and included some reworkings of the tracks from the album, as well as the debut of “Try.” “Quite Right” was recorded just before the tour in May and feels like it’s of the same era as the songs of “Young Adult” but also with one foot in the new. It’s exciting to enter this forthcoming tour with a celebration of music from throughout the year.”

2018 has been something of a benchmark for the Essex-based artist, with the release of this buoyant new collection a true testament to Duckworth’s re-invigorated return as Get Cape. Wear Cape. Fly. Reviving the moniker after a lengthy hiatus, Get Cape. Wear Cape. Fly. dug-deep to unearth his finest and most forthcoming work in years in latest studio album: ‘Young Adult’. Featuring a string of equally different and individually brilliant singles including “Adults“, “Always“, “Just A Phase“,“DNA“, and ‘VHS Forever‘, the album was met with warm reviews from fans and critics alike, with Louder Than War praising Sam’s skill for “catchy and introspective 3 minute pop songs”, whilst Upset Magazine championed the record as something of a “soundtrack to a revolution” (4/5).

Making his return to the live stage with a triumphant one-off UK show at The Village Underground in London back in January to mark the release of ‘Young Adult’ (a show hailed by The Independent as “a heartfelt and raucous performance” (4/5)), Get Cape. Wear Cape. Fly has continued to win over fans old and new with a string of warmly received live appearances and festival shows including those at Lost Evenings III, Reading + Leeds and beyond.

In the company of his full live band once more, Get Cape. Wear Cape. Fly. now looks forward to a full UK tour this Autumn. Kicking off at Lincoln’s Engine Shed on the 4th October, the two-week run will see Duckworth and co. hit up 12 cities in total with highlights including an appearance at Manchester’s Neighbourhood Festival (6 Oct) and a grand finale at London’s Islington