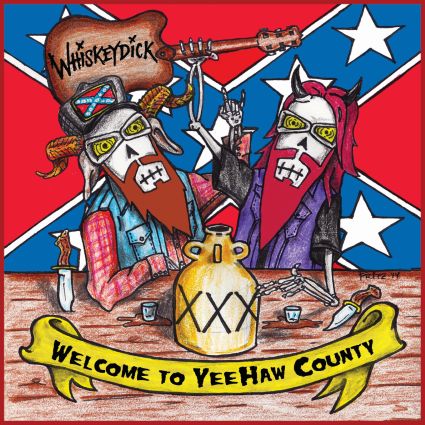 Last month we told you they were coming to the UK. Now they’ve got a documentary online. Eeek.

Cult favourites WHISKEYDICK return to the UK this March to blow minds with a double barrel blast of dreadnaught shredding and hillbilly bellowing that makes you want to knock back a shot, stand up tall, and holler “Oh-Hell-YeeHaw!

At the lonesome crossroads where country and metal intersect, stand two swaggering badasses holding acoustic guitars. They’re not interested in your soul they have plenty of soul already.

Cult favorites WhiskeyDick blow minds with a double barrel blast of dreadnaught shredding and hillbilly bellowing that makes you want to knock back a shot, stand up tall, and holler “Oh-Hell-YeeHaw!”

The Fort Worth duo carry on the Texas traditions of super-powered guitar slinging and clever songwriting that make lone star music a worldwide curiosity, except Reverend Johnson will remind you more of Dimebag Darrell than Billy Gibbons and Fritz remains more lyrically akin to David Allen Coe than Robert Earl Keen.

WhiskeyDick’s live show is a true spectacle: two giant, tattooed, mean-looking dudes saunter on stage and sit down on 2 chairs, then pick up acoustic guitars and proceed to amaze everyone by generating more power than a full band by means of Fritz’s deep, rich vocals, Johnson’s unapproachable acoustic guitar heroics, and their triumphant songwriting.

The metal-neck tandem, who formed in 2004, has produced 7 indie releases Rebel Flags and Whiskey, First Class White Trash, Drunk as Hell, The Wicked Roots, 100% Drunk Live Album – WhiskeyDick it Happens Ep double album on one cd and FROM THE DEVIL’S BOOTS- which yielded such live classics as “Drunk As Hell,” “Evil’s Got a Hold of Me,” “Shooting Guns,” “Barn Burner,” “River of Sin,” “Blacktooth Grin,” “Fallen Heroes,” “Christina,” “YEEHAW” and the rarely performed, audience favorite “Wookie Pussy.”

With their eighth album sitting in the Vault and there 9th in the works and their 1st international 9 Country tour begining August 19th, WhiskeyDick stands ready to introduce themselves to the world as the YEEHAW SOUND OF TEXAS.